The Drawbacks Of A Clinton-Warren Ticket 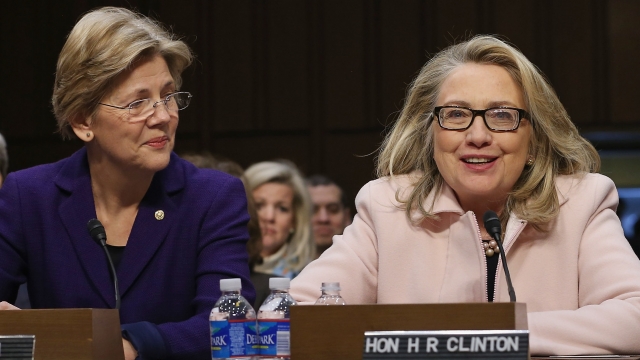 Unless something completely unexpected happens, Hillary Clinton will be the Democratic presidential nominee. But her VP spot is still up for grabs.

And Elizabeth Warren, the darling of the progressive left, leads the list of liberal VP picks. Putting Warren on the ticket could help unify a Democratic Party thrown into turmoil by a progressive insurgence.

And she's been able to hit the presumptive GOP nominee in a way that none of his other opponents have been able to during the entire primary season. While on "The Late Show with Stephen Colbert," Warren said of Trump: "He is not a business success — he is a business loser."

But a Clinton-Warren ticket doesn't come without its downsides.

First of all, it complicates the Democrats' ability to flip the Senate. If Clinton were to win, Warren would leave a vacancy that would be filled, not by an election, but by Massachusetts Republican Gov. Charlie Baker.

And as a senator, Warren has been able to help shift the Democratic Party further left with a populist message that resonates with the most liberal faction of the party. That's not something she'd be able to focus much time on as Clinton's vice president.

But the most important reason is chemistry. A running mate could be chosen for a few different reasons, ranging from helping win support from a certain demographic to guaranteeing a win in a swing state. But they shouldn't complicate the campaign.

"The credit card companies have been giving money and they have influence. She has taken money from the groups and, more to the point, she worries about them as a constituency," Warren told Bill Moyers in 2004.

But if Warren could help Clinton get elected, maybe the bruises they take on the way to the White House would be worth it.