The Defending NBA Champs Could Be Even Better This Year 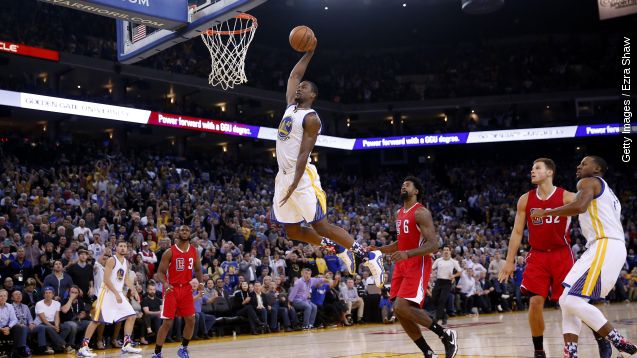 SMS
The Defending NBA Champs Could Be Even Better This Year
By Matt Moreno
By Matt Moreno
November 5, 2015
The Golden State Warriors outlasted the LA Clippers on Wednesday night. They came back from a 10-point deficit to win 112-108.
SHOW TRANSCRIPT

As if you needed another reason to buy into Steph Curry and the Golden State Warriors, the squad just provided further proof of how good they really are.

It was a clash of two undefeated NBA teams Wednesday night as the LA Clippers strolled into Oakland looking to settle down Curry and the gang, and late in the fourth quarter, it looked like that would happen.

But the Warriors fought back, erasing a 10-point deficit in the fourth en route to a 112-108 win.

So if you're keeping score at home, that's five times this season the Warriors have scored 100 or more points, and the train doesn't seem to be stopping anytime soon.

Remember, these guys are defending NBA champs from last year, too.

"As for Steph Curry, he said on the broadcast after the game, 'We're better this year.' He seems like he's better. ... How — how do you even frame this question? What do you do with this guy right now?" ESPN's Scott Van Pelt asked.

If they're truly better than they were last year, it's a scary notion for teams in the Western Conference.

The Warriors started 5-0 last year, too, before dropping two straight. It's OK though. They went on to win 16 in a row after that to start 21-2. There's also that NBA championship thing.

Now, a 16-game winning streak might be a tall order, but the Warriors appear to still be leaps and bounds above the rest of the league.

This video includes images from Getty Images and music by Birocratic / CC by 3.0.