The Deer Population Is Out Of Control, So Communities Are Culling 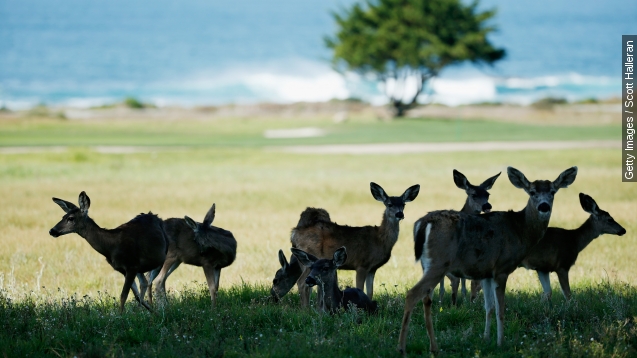 SMS
The Deer Population Is Out Of Control, So Communities Are Culling
By Melissa Prax
By Melissa Prax
December 6, 2015
The U.S. deer population is about 60 times greater than it was in the '90s, and some communities worry those numbers could cause more car accidents.
SHOW TRANSCRIPT

Deer culling. It's controversial, and it's happening in communities across the US. That.s right. We said culling, also known as selective slaughter.

It's not just rural communities that have a major problem with deer. Deer are also prevalent in suburbs where residents aren't allowed to hunt but where there's a little green space and enough coverage for deer.

The deer population boom is a recent problem. It's estimated that there are 30 million white-tailed deer in the U.S., compared to half a million in the '90s.

Culling is a relatively recent practice, and it's strategic. There are specific plans in place to cull for a certain amount of deer to ease overpopulation. This number is usually determined by deer per square acre.

For deer in more urbanized areas, there are few predators other than your car. From mid 2011 to mid 2012, it's estimated deer caused over 1 million car accidents in the U.S. This led to 200 deaths and cost about $4 billion. (Video via Kenton County Police Department)

Deer are also hard on crops and trees — the majority of their diets — and when there are too many of them in one area, the competition can make it hard for the animals' survival. (Video via Deer and Deer Hunting)

Typically, culling happens during hunting season, which in most states also falls during the deer's mating season between September and December. (Video via David inGeorgia / CC BY 3.0)

There are a few different ways deer are culled: through lethal injection, sharpshooting or trapping. These methods intend to kill the animal humanely. The city or police department that typically culls or hires companies to do it will ask permission if they plan on using your property for culling. (Video via KMOV)

And in many cases, the meat will be donated to local shelters or food pantries.

And deer aren't the only animals culled. In Yellowstone National Park, bison are being culled. While that's drawn plenty of criticism, some argue that culling is simply another element to animal conservation.