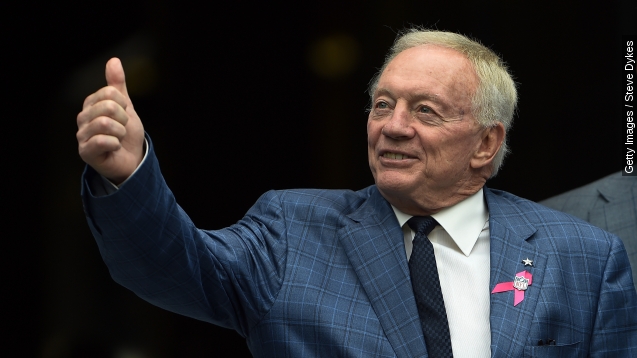 According to Forbes, the Dallas Cowboys are the world's most valuable sports franchise, valued at $4 billion. It's familiar territory for the NFL team as this is its ninth-straight year with the honor.

And it's pretty obvious when you look at their home field, AT&T Stadium.

The $4 billion price tag for the franchise is a big leap from where it was in 2007, the first time it ranked atop the league in valuation. Then, it was valued at $1.5 billion, according to Forbes' estimates. (Video via AT&T)

Impressively, the Cowboys have been able to retain their value even thought they haven't won a Super Bowl since 1995.

As a whole, the NFL is still bringing in a healthy amount of cash despite all of the recent off-the-field issues involving concussions and domestic violence.

"I got it wrong in the handling of the Ray Rice matter," Goodell said during a press conference in 2014.

And clearly Deflategate didn't effect the New England Patriots' pockets too much either. Tom Brady and company ranked second on the list of NFL teams with a valuation of $3.2 billion — up 23 percent from last year. (Video via ABC)

In fact, valuations for all 32 NFL teams rose, Forbes reports. The average NFL franchise is now worth about $2 billion, thanks in large part to TV contracts, sponsors and new stadiums.

Worldwide, Spanish soccer team Real Madrid beat out the Patriots as the second most valuable sports franchise with a valuation of $3.26 billion.

Rounding out the NFL's top five after the Patriots are the Washington Redskins, New York Giants and San Francisco 49ers.