The Cost of Suspending Uber In Nevada 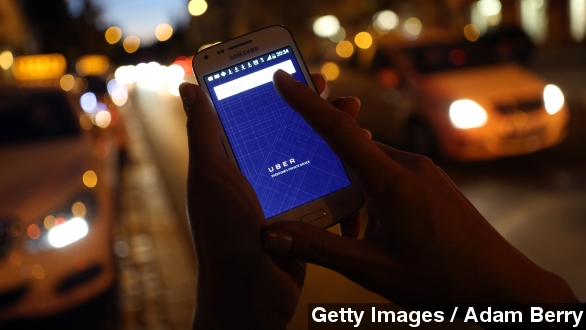 SMS
The Cost of Suspending Uber In Nevada
By Erik Shute
By Erik Shute
November 28, 2014
Uber pulls suspended operations in Nevada, temporarily ending the jobs of its 1,000 drivers in the Reno and Las Vegas areas.
SHOW TRANSCRIPT

Nevada becomes the first state to curb ride-sharing app Uber. The company suspended service temporarily in light of an injunction upheld by the state.

Uber responded in a blog post Wednesday night. It promised to stay with the Silver State for the “long-term” and argued its exodus is the result of a misunderstanding of its business model.

However, several sources focused on one line in particular that spoke volumes.

As of Friday, those jobs are only temporarily suspended.

Nevada’s main beef with Uber isn’t any different than the conversation several states are having nationwide. Uber argues it’s a technology company which connects riders to contracted drivers. People like Washoe County District Court Judge Scott Freeman say it’s a company that drives people for a fee and should be regulated as such. The judge brought an injunction to the company Tuesday to try and prove that. (Video via Uber | KRXI)

Now, a Nevada Supreme Court has upheld that injunction and determined the case against Uber will be heard in Washoe County. (Video via KTNV)

The move was the final blow to the service which has been met with opposition since opening in late October. The service only operated in Reno and Las Vegas.

From day one drivers have had encounters with local law enforcement and the transportation authority. Fifty Uber cars were impounded after the first month of service according to the Las Vegas Review-Journal.

Some local media suspect Arizona could follow suit behind Nevada next. No court date has been set for Nevada v. Uber. In the meantime, Uber is asking riders to sign a petition on its website. More than 18,000 have signed so far.