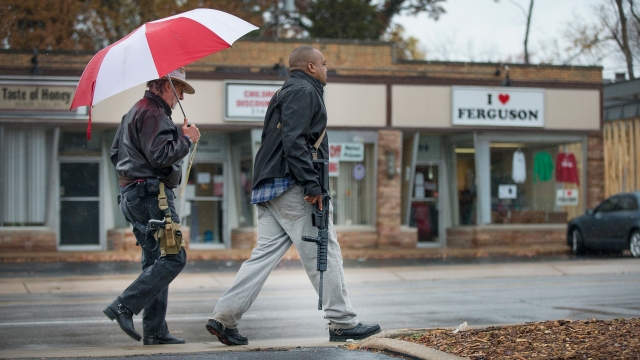 In the chaos of the Dallas protest shootings, Dallas police named rifle-toting Mark Hughes a shooting suspect. Not a person of interest. A suspect.

"He was allowing himself to carry a firearm, but that's his constitutional right," his brother John told a KTVT reporter.

Texas is an open-carry state, and licensed gun owners can carry their firearms in plain sight.

In the late '60s, then-California Gov. Ronald Reagan enacted the Mulford Act, which restricted the public from openly carrying firearms. It was in direct response to the Black Panthers exercising their Second Amendment rights.

"Anyone who would approve of this kind of demonstration must be out of their minds," Reagan said.

In 2012, Marissa Alexander was convicted of an assault charge from a 2010 incident in which she fired a warning shot — with a reportedly licensed gun — at her abusive husband.

And more recently, in a graphic cellphone video, Philando Castile's girlfriend says he told the officer he had a licensed weapon and was reaching for his ID when he was shot and killed.

"My boyfriend carries all his information in a thick wallet in his right-side back pocket. As he's reaching for his back-pocket wallet, he lets the officer know, 'Officer, I have a firearm on me.' I begin to yell, 'But he's licensed to carry,'" Lavish Reynolds said.

Here's Castile's mother, Valerie: "Him and his sister and they had a conversation about the conceal to carry permits that they both have."

Then there's the perception of a black person carrying a gun. Tamir Rice, John Crawford and Robert Dentmond were all shot and killed by police because they were seen with objects that looked like real firearms.

And even with databases like "The Counted" from The Guardian and "Fatal Force" from The Washington Post, it's still difficult to pin down exactly how dangerous or deadly it is to be a black person carrying a gun — or anything that looks like one.