The Clinton Foundation Is Now Limiting Who Can Donate 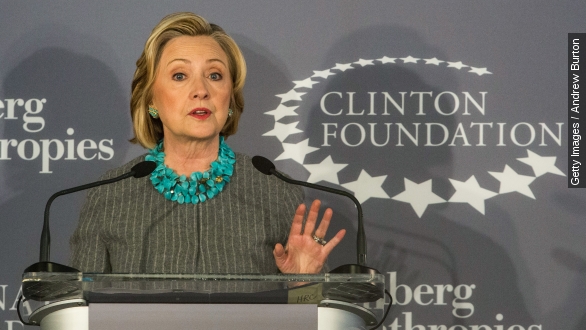 Hillary Clinton has officially announced her candidacy for president, and despite concerns that it will create a conflict of interest, The Clinton Foundation says it plans to continue accepting donations from foreign governments during her campaign.

But here's the thing: the foundation is actually limiting how many countries it will now accept donations from.

In a statement on its website, it announced it will only accept contributions from the foreign governments of Australia, Canada, Germany, the Netherlands, Norway and the UK.

Now that is quite a downsize in countries allowed, seeing as the foundation has accepted money from Saudi Arabia, Oman and the United Arab Emirates in the past.

The fact that the foundation has accepted donations from outside the U.S. has always raised some eyebrows, and it's been getting even more attention ever since rumors that Hillary might run for office began.

Back in February, The Washington Post analyzed all of the foundation's donors and found that more than half of those who've given more than $5 million are foreign donors. (Video via The Clinton Foundation)

The review of the foundation's data also found, "Foreign donors and countries that are likely to have interests before a potential Clinton administration — and yet are ineligible to give to U.S. political campaigns — have affirmed their support for the family's work through the charitable giving."

MSNBC reports the issue has given the Republicans plenty to chew on, such as presidential hopeful Carly Fiorina, who said, "She tweets about women's rights in this country and takes money from governments that deny women the most basic human rights." (Video via Fox News)

On the other hand, there've been Democrats coming to Hillary's defense, such as Virginia Governor Terry McAuliffe, who pointed out that the money donated goes to charity and not her campaign.

In light of Hillary's run for president, the Foundation also noted it's canceling an overseas conference in Athens that was planned for June and will start disclosing the names of those who donate four times a year, instead of just annually.