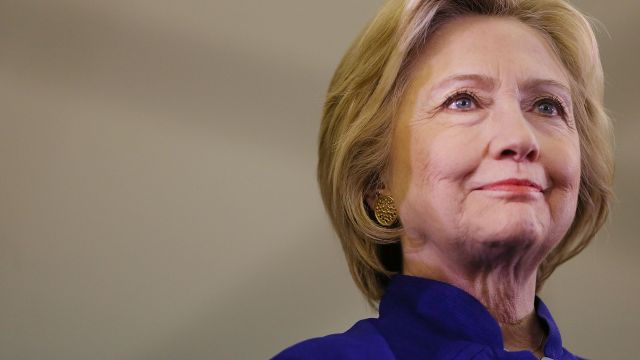 SMS
Clinton Is Still Searching For A Stand-In Trump For Debate Prep
By Lindsey Pulse
By Lindsey Pulse
August 21, 2016
Nominees typically go with seasoned politicians, but Clinton's campaign is having trouble finding someone to mimic her Republican counterpart.
SHOW TRANSCRIPT

The first presidential debate kicks off in about one month, but Hillary Clinton's campaign is reportedly having trouble finding someone to play Donald Trump for debate practice.

"It's very hard to find someone to mimic the reckless temperament and the hateful instincts and divisive instincts of Donald Trump," Clinton's campaign manager Robby Mook told CNN.

SEE MORE: The Trump Campaign Is Making Changes, But Will They Stick?

Which isn't totally surprising. Many have impersonated him, replicating his voice and mannerisms to a T.

But when it comes down to it, the Republican nominee can be difficult to predict.

Before his recent campaign overhaul, Trump rarely stuck to the teleprompter — or any other script for that matter.

And Clinton isn't alone in the quest to find a sparring partner. Sen. Rob Portman, who has played Barack Obama and Al Gore as well as other nominees in previous mock debates, told the Trump campaign he would not be playing Clinton this time around.

But by the looks of it, Trump doesn't appear to be too worried. When asked about the issue earlier this month, Trump told The New York Times that he's "never had a debate coach."

People are wondering how Clinton will fare without preparation. Typically debate prep partners are seasoned politicians who have a grasp on what opponents might bring to the table.

But there is some speculation that the campaign might go in a completely different direction. The Washington Post suggested that Darrell Hammond, a "Saturday Night Live" alum who has impersonated the business mogul for years, for the role. And billionaire Mark Cuban told Politico last month he'd be "happy to do it."