The Children Who Fight For ISIS 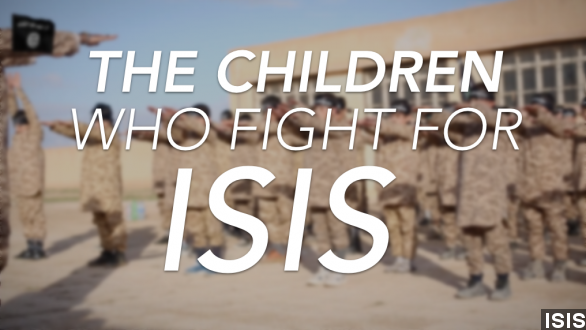 SMS
The Children Who Fight For ISIS
By Jake Godin
By Jake Godin
March 10, 2015
Militant groups using children for combat is nothing new, but ISIS has committed the war crime in a much broader fashion than groups in the past.
SHOW TRANSCRIPT

War Crimes — The Rome Statute of the International Criminal Court:

Article 8, Paragraph 2 (b) XXVI — Conscripting or enlisting children under the age of fifteen years into the national armed forces or using them to participate actively in hostilities.

There’s no estimate on just how many child soldiers have been recruited to fight in Iraq and Syria.

In a 2014 report by Human Rights Watch, one interviewee said he trained at an ISIS camp with around 200 others, some as young as 13 or 14 years old. Another who attended the same camp estimated more than half of the trainees were under 18.

Since September 2011, the Violation Documentation Center in Syria has counted the deaths of 241 male children considered "non-civilian."

Human Rights Watch has called on groups fighting in Syria and Iraq to make public commitments banning the use of children under 18 for fighting.

ISIS has not heeded their call.

"In this training camp, we learn the Noble Quran, the Arabic language, Tajwid, and Fiqh," says one ISIS militant during a school propaganda video.

While ISIS isn’t the only militant group in the Middle East to recruit children, reports suggest it is more aggressive than most groups in doing so.

Under the guise of free schooling, children are taught the ideological values of the Islamic State. Prayers, Arabic language, Sharia law education and military studies are all mandatory studies.

Those training in combat are sometimes referred to as lion cubs or simply cubs of the Islamic State in online videos.

In part, the idea is to ensure there’s a new generation of jihadists to defend ISIS territory in the future.

But reports from the United Nations say children are also often used as fighters not just trainees, guarding bases or checkpoints. One report even says children were used as shields on the front line of combat against enemies.

Not all children are successfully indoctrinated. In December, a 14-year-old escaped ISIS by volunteering as a suicide bomber but then turning himself in to Iraqi guards.

Speaking to Voactiv, a senior fellow at the Foreign Policy Research Institute suggests ISIS has a more practical reason for recruiting children — they’re running out of fighters.

While his claim may be difficult to verify, U.S. officials have recently claimed that so far, more than 8,500 ISIS fighters have been killed by coalition forces.

As for just how many fighters ISIS has, estimates range from the most recent CIA guess at 40,000 to the a Kurdish official's 2014 estimate that ISIS could muster up to 200,000 fighters if need be.