The Case Against (And For) HTC's Pricey Virtual Reality Headset 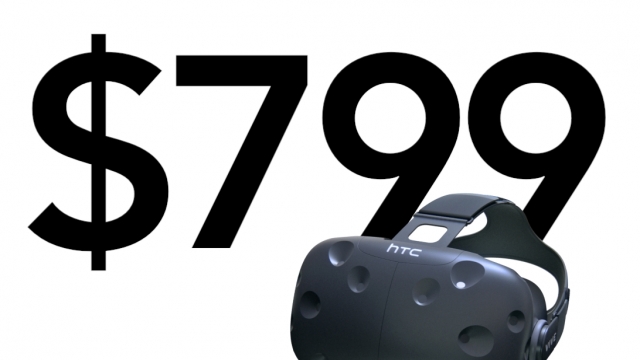 SMS
The Case Against (And For) HTC's Pricey Virtual Reality Headset
By Evan Thomas
By Evan Thomas
February 24, 2016
HTC's Vive headset might seem expensive, but big price tags aren't unusual for a new industry, and these days, you do get a lot of tech per dollar.
SHOW TRANSCRIPT

The promise of virtual reality is that it will blow your mind. It's a shame it will reduce your wallet to a pile of smoking wreckage along the way.

Yes, this week at Mobile World Congress, HTC's Vive got an April 1 release date and an eye-watering price tag: $799.

For that, you get what is arguably the most mature control system so far, motion-tracking designed to take advantage of larger spaces and a pass-through camera so you can see what's actually around you.

Yeah, but $800? And on top of whatever your VR-ready computer costs? You might consider it a sign, another expensive argument for "wait and see." Literally.

We've said it before: VR is something you need to experience for yourself to fully appreciate. We wouldn't recommend shelling out for one sight unseen — or experience unexperienced.

And remember, this is first-generation VR. There's promising, shiny stuff coming, but this industry is still in its infancy. There's no killer app yet.

At the same time, companies seem to think VR is worth it at the current price point. Otherwise, they wouldn't be selling headsets for $800.

It's going to price a lot of people out of the market: Some headlines are already proclaiming VR dead again, done in by its cost.

Others argue it's too revolutionary, too much of a sea change to die now. But The Verge proposes HTC might be able to keep itself afloat on the Vive alone.

Look at it this way: The price isn't all that far off from a flagship smartphone — though you'll probably use an iPhone a lot more than a VR headset.

Also consider that VR has always been expensive. The Forte VFX1, for example, came out in 1995 for $1,098, when you adjust for 2016 inflation. Compare that to what today's systems are capable of, and $800 starts to sound more reasonable.

And, like any consumer tech, prices will fall over time. It's just a matter of scale picking up. Of course, nobody's going to blame you for holding off until then.

This video includes clips from BobsonTV / CC BY 3.0, HTC, CCP Games, Apple and SiliconClassics and music by Frenic / CC BY 3.0.