The Brontosaurus Is Back, But For Some, It Never Left 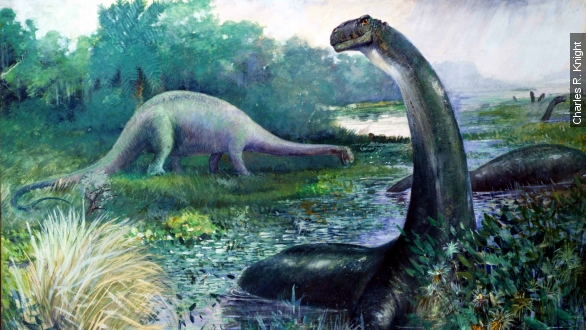 The story of the brontosaurus is long and confusing, but it may finally be getting some clarification.

If you've ever been scoffed at or condescendingly corrected for saying brontosaurus, today is your day. Scientists are bringing the bronto back into the fold.

For a long time, brontosaurus was thought to be a misnomer, a name its discoverer O.C. Marsh applied to bones that really belonged to apatosaurus, which Marsh had named two years earlier in 1877.

This man, paleontologist Elmer Riggs, presented evidence in 1903 the so-called brontosaurus bones bore an overwhelming resemblance to apatosaurus, and from that point on, the two were considered one and the same.

But that scientific distinction didn't really puncture the popular culture, and the brontosaurus lived on through movies, music and stamps. (Video via Universal Pictures / 'The Flintstones')

But the new research, hundreds of pages of it, exhaustively analyzed specimens of diplodocidae — the group to which apatosaur belongs — and determined brontosaurus was in fact its own genus.

There's a reason the public at large didn't really seem to care whether the dinosaur in question was a brontosaur or an apatosaur.

Establishing what an animal's species or genus is falls under the purview of taxonomy, which kind of faces a double threat when it comes to attracting public interest. (Video via CSIRO)

For one, it's kind of a dry science. The Latin names and lack of pictures have long kept it largely in the purview of scientists. (Video via Crash Course)

And, like all science, it's fluid. Animals' classification can change according to a number of factors like genetic evidence or new discoveries. (Video via Curtin University)

As paleontologist Stephen Brusatte explains: "Naming things is more art than science. There is no machine or experiment that can tell you whether two things are different enough to be called different."

But whatever the designation bronto or apatosaur, Brusatte probably sums it up best: "This dinosaur by any other name, or any name indeed, would still be just as fascinating."