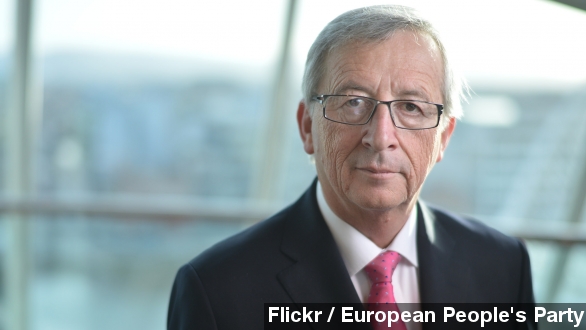 The European Council has a new president — and he's exactly who British Prime Minister David Cameron didn't want to get the job. Luxembourg's Jean-Claude Juncker was elected for the role by the heads of almost all of the EU's 28 member states — over Cameron's strenuous objections.

So why was Cameron so opposed to Juncker, and what does this very public defeat mean for Britain's future in the E.U.?

Let's start with the man himself. Juncker served as Luxembourg's Prime Minister for eighteen years, and is seen as a veteran E.U. player. (Via Euronews)

Juncker is a strong proponent of closer E.U. integration, which has made him unpopular in Britain. Last month's European elections, which saw big gains for British far-right party UKIP, were widely seen as a British vote against integration. (Via ITV)

With strong anti-E.U. pressure from voters, Cameron vowed to block Juncker's appointment. The Prime Minister of Hungary joined his veto — but the other 26 E.U. leaders voted against Cameron. (Via European Council)

In the wake of his defeat, Cameron's political opponents accused the Prime Minister of heavy-handed bluster and inept deal-making skills.

"I've never seen a negotiation so cack-handed. ... Why did he fail so catastrophically to persuade anybody to join him?" (Via BBC)

"He wants to conclude from the past 48 hours that Europe is somehow unreformable. It doesn't show that at all. It shows that David Cameron is not the man to reform it because he has become toxic." (Via Channel 4)

But Cameron's public stand against Juncker has garnered him some support back home. The Daily Mail writes Cameron "drew a clear line in the sand, one which will be remembered in the months to come by voters increasingly disenchanted with high-handed edicts from Brussels."

And The Telegraph even described Cameron's loss as "a Dunkirk moment, in that it was technically a defeat but displayed such courage and tenacity that it translated into a moral victory."

Juncker's appointment has raised serious concerns that a Euroskeptical Britain might soon decide to exit the E.U. Cameron has promised a public referendum on the issue in 2017.

Top E.U. politicians sought to mollify Cameron's wounded ego after the vote, promising to address Britain's concerns with the union and emphasizing the need for reform. (Via Deutsche Welle)

But an analyst for The Guardian says the Euroskeptics in Cameron's Conservative party might encourage future standoffs between Cameron and the rest of the E.U. "If this pattern repeats itself in future negotiations, the UK's demands will become increasingly strident and the EU will give some ground but not enough. This will be portrayed as further humiliation and increase the chances of a no vote on referendum day."

Juncker's nomination still has to be formally ratified by the European Parliament, which is expected during a plenary session on July 14-17.