The Brexit, Brexplained: What Happens If The UK Leaves The EU? 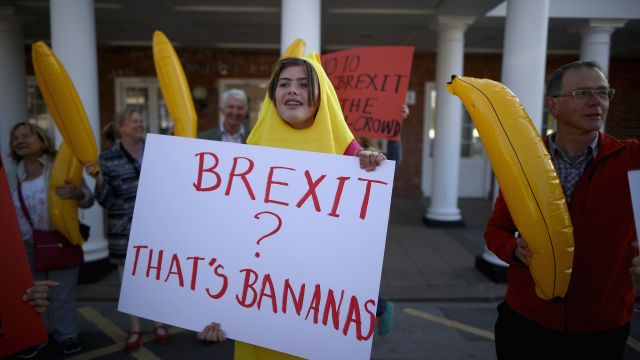 SMS
The Brexit, Brexplained: What Happens If The UK Leaves The EU?
By Matt Picht
By Matt Picht
June 21, 2016
Voters in the United Kingdom might decide to leave the European Union. How would that work out, exactly?
SHOW TRANSCRIPT

The United Kingdom has been a member of the European Union for over 40 years. On June 23, the country's citizens will decide whether to stay in the bloc. What happens if they decide to leave?

According to E.U. rules, any member state can notify the European Council it intends to leave the union. The Council then has two years to negotiate an exit strategy with the member state before it's released from the treaties that bind the E.U. together.

No one's sure of the exact terms the U.K. would leave on, but the country would almost certainly lose access to major E.U. perks like the single market, which allows goods and people to move freely throughout the bloc. On the other hand, the U.K. would no longer have to abide by the bloc's rules and regulations.

And that's the main draw for fans of a so-called "Brexit" — freedom from E.U. rules would let the U.K. set its own policies on issues like immigration and business regulation. Euroskeptics also point out that leaving the E.U. would free up the £8 billion a year E.U. membership costs the U.K.

Euroskeptic-skeptics argue the financial costs of a Brexit far outweigh the gains. The U.K. could end up iced out of profitable trade relationships with big E.U. countries like France and Germany, and the uncertainty surrounding the move could severely weaken the pound.

But if the U.K. can overcome those concerns, there's a fear within Europe that a Brexit could trigger a wave of similar exits from the E.U. Greece came close to abandoning the E.U.'s common currency last year, and the Czech Republic has recently been eyeing the door as well.

On top of everything else, leaving the E.U. would dramatically shake up the U.K. political scene. Conservative Prime Minister David Cameron has been campaigning hard for the country to stay in the E.U. and would likely step down as the head of his party if the country left the bloc.