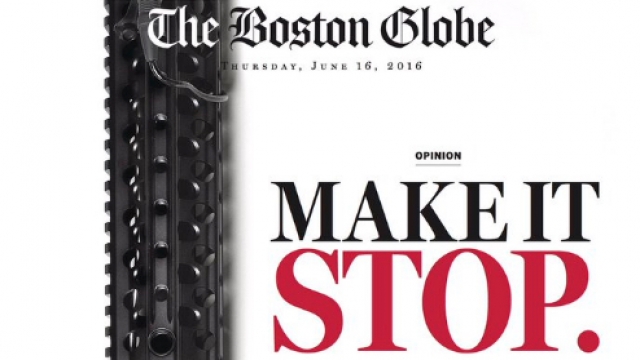 The Boston Globe's Thursday front page is a plea to end gun violence in the U.S., featuring a picture of an AR-15 rifle and bullet hole to scale.

The semi-automatic AR-15-style gun is what the shooter used in the Orlando nightclub attack to kill 49 people.

That style of weapon has been used in other mass shootings, including Sandy Hook Elementary School in Connecticut and an Aurora, Colorado, movie theater.

Proponents of tighter gun reform say guns that can hold dozens of rounds and fire rapidly shouldn't be so easy for anyone to get their hands on.

But gun rights supporters argue studies haven't proven the ban had an effect on mass shootings.

The Boston Globe also tweeted the names, ages and dates of death of all mass-shooting victims since that assault weapon ban expired.

The Globe says there have been 47 mass shootings since the law ended, but as Newsy has reported before, that's a notoriously difficult term to define.

This video includes clips from Florida Gun Classifieds / CC BY 3.0, Hailscott / CC BY 3.0 and WKMG and images from the U.S. Government Printing Office, bk1bennett / CC BY ND 2.0 and Getty Images.