The Blizzard That Wasn't Puts Gov't Officials On The Defense 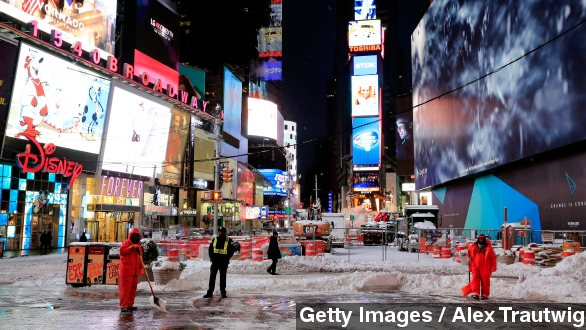 SMS
The Blizzard That Wasn't Puts Gov't Officials On The Defense
By Jake Godin
By Jake Godin
January 28, 2015
A blizzard that was supposed to be of historic proportions but wasn't prompted emergency precautions some city officials are now having to defend.
SHOW TRANSCRIPT

It was supposed to be a blizzard of historic proportions.

CNN: “Breaking news, a massive, and historic blizzard blaring down on the Northeast tonight.”

Fox News: “... what forecasters are calling a historic winter storm.”

New York City Mayor’s Office: “...we are facing most likely one of the largest snowstorms in the history of this city.”

If you haven’t heard by now, that wasn’t the case for the majority of the Northeast. And now city officials in New York and New Jersey are on the defensive over the mandatory travel bans and other emergency procedures.

New York Governor Andrew Cuomo, who made the call to shut down New York City’s subway system for the first time in 110 years, defended his decision in a Tuesday press conference.

“I would much rather be in a situation where we say we got lucky than one where we didn’t get lucky and somebody died.”

So what went wrong here? Well, weather forecasting has room for error, and there was something of a communication breakdown.

New York's National Weather Service station made an apology over Facebook saying, “The science of forecasting storms, while continually improving, still can be subject to error.”

The Washington Post points out communication was also an issue. Many forecasters simply didn’t explain how complicated the forecast was and how much variation there could be in the end. (Video via Climate Desk)

While New York City saw about 10 inches of snow when it was all said and done, other parts of the northeast did get hit hard. Worcester, Mass., a city about 40 miles from Boston, recorded more than 33 inches of snow.

To ensure similar misunderstandings don’t happen again in the future, the National Weather Service announced in a press call it will review how it communicates uncertainty in forecasts.