The Biggest, Worst Cyberhacks Of 2014 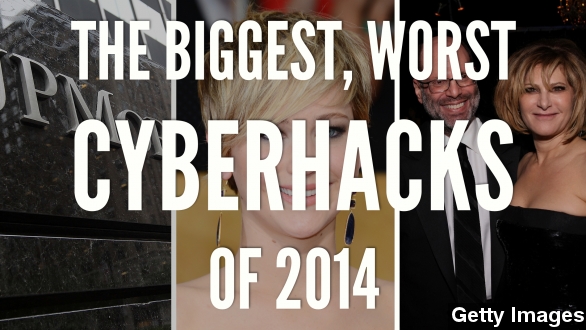 2014’s been a rough year for cyber security.

From corporate hacks to nude photo leaks, the year has likely inspired many to choose a stronger password than just — you know — "password."

Remember the Target credit card breach? True, it started in 2013, but after we learned 40 million consumers were affected, it’s no surprise we were still talking about it well into the new year.

Even I was lucky enough to have to get a replacement card after shopping at Target during the breach.

Here’s another cringe-worthy number: 80 million … as in 80 million account holders. In summer 2014, JPMorgan Chase suffered a breach that saw the theft of names, addresses and emails. Social security numbers, passwords and other sensitive information were reportedly unaffected.

Not even the United States Postal Service was safe. 800,000 federal employees were affected by a breach that involved the theft of social security numbers, employment data and other sensitive information.

And what's a look back at major hacks this year without mention of the celebrity photo leak?

The breach put a human face on cybersecurity, spurring Apple to tighten its iCloud security and ramp up two-factor authentication. (Video via Macworld)

And that probably would have been the biggest catastrophe to come out of the entertainment industry this year, if not for the Sony Pictures breach.

“You want us to kill the leader of North Korea,” Seth Rogen asks in Sony Pictures' "The Interview."
“Yes,” responds Lizzy Caplan.

Hackers overran Sony Pictures' servers and compromised terabytes of confidential data, exposing everything from embarrassing emails to personal data from thousands of employees. It’s a corporate security failure on an unprecedented scale, and the ramifications will likely echo well into 2015.

All in all, I think the hackers might have won this year. Let's just hope things go a bit better in 2015.