The Biggest Tech Mistakes, Gaffes And Flops Of 2014 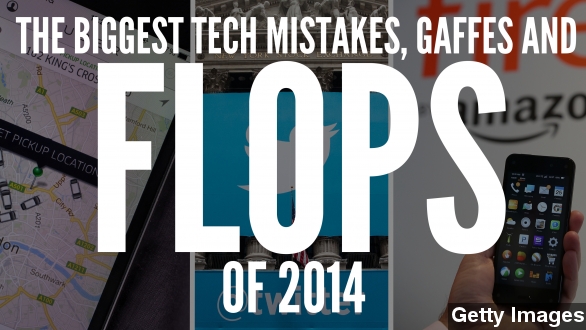 SMS
The Biggest Tech Mistakes, Gaffes And Flops Of 2014
By Jake Godin
By Jake Godin
December 31, 2014
Every year has some duds. We're taking a look at the biggest tech flops of 2014, including everything from Gamergate to Uber.
SHOW TRANSCRIPT

Uber's reputation took a beating in 2014 after facing multiple PR slips, legal backlash and consumer complaints. Even after grabbing a $40 billion valuation in December, not everyone is happy — in particular, journalists, taxi drivers, public officials and its own drivers.

Gamergate, which began in August, has since become a full-blown Internet culture war. Part misdirected lynchmob, part social movement, the controversy has led to serious threats and boycotts. It created a rift in the gaming world. In other words, a tech flop. (Video via Bethesda Softworks / "The Elder Scrolls V: Skyrim", YouTube / i6Hitman | Nintendo / "Mario Kart 8")

Amazon made its bid in the smartphone game in early 2014 with the Amazon Fire Phone. The phone became available in June to lukewarm reception. The price, which was one of the biggest issues with the phone, dropped substantially. (Video via Business Insider)

Along with the price drop, Amazon lost millions in unsold stock. The Fire Phone was a blow to the company's prestige. Amazon's shares have dropped 23 percent this year. The company also lost $473 million last quarter. And yet, Amazon says stay tuned for what's next.

Tech flop: an up-and-coming product in tech or a company expected to do well that ends up making a PR mistake or completely, utterly flops.

Twitter also had a rough year, though with something else — value. On Nov. 7, 2013, Twitter opened on the New York Stock Exchange at $26. It closed at almost $45. But a year later, Twitter's debt was rated "junk" by Standard & Poor's Ratings Services. Executives have unloaded shares, and Twitter's stock has plummeted 43 percent since last December.

But unlike another tech flop, none of those were about "ethics in gaming journalism."

But the biggest flop wasn't Gamergate.