The Biggest Reveals From The Star Wars Celebration 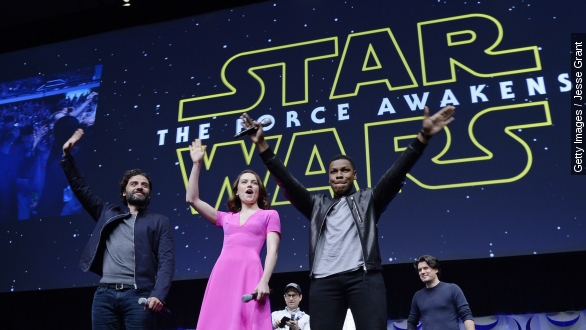 With the first official "Star Wars" movie in ten years set to hit theaters this December, the annual Star Wars celebration in Anaheim, California brought a lot of big announcements.

Other than the second awesome teaser for "Star Wars: Episode VII - The Force Awakens," the biggest news coming out of the celebration was new details on the three lead characters.

Daisy Ridley plays Rey, a scavenger on a desert planet that is pretty much just minding her own business until John Boyega shows up.

Boyega's character Finn is a stormtrooper who finds himself in some kind of danger for some reason. Right now we don't really know much about him other than he spends most of his time sweating and looking terrified.

Oscar Isaac plays Poe Dameron, an X-Wing pilot who, according to Isaac, is on a mission for "a certain princess" when he runs into Boyega.

And that's pretty much all we know. We don't officially know what the central conflict of the movie is, who out of these three are Jedi or whether the other stormtroopers are jealous of this stormtrooper's awesome outfit.

Next up, we learned a few plot details about the standalone film "Star Wars: Rogue One," which is supposed to hit theaters in December, 2016. People at the convention got to see a short CG clip but the rest of us aren't so lucky.

Felicity Jones is set to star as a Rebel solider trying to steal the plans for the original Death Star from the Empire.

The film will take place just before the start of Episode IV and is supposed to have a grounded, war movie feel to it — as grounded as a Star Wars movie can get, anyway.

Director Gareth Edwards says the film "comes down to a group of individuals that don’t have magic powers … that have to bring hope to the galaxy."

The last big takeaway from the Star Wars Celebration was the reveal trailer for the "Star Wars: Battlefront" video game.

We already knew this game was in the works, but the trailer impressed a lot of people with just how much it looked like a "Star Wars" movie. The games comes out Nov. 17 for PC, Xbox One, and PS4.

Well, those are the three big reveals from this year's Star Wars celebration. Hopefully that can tide you over for the next eight months while you wait for "The Force Awakens" to hit theaters.