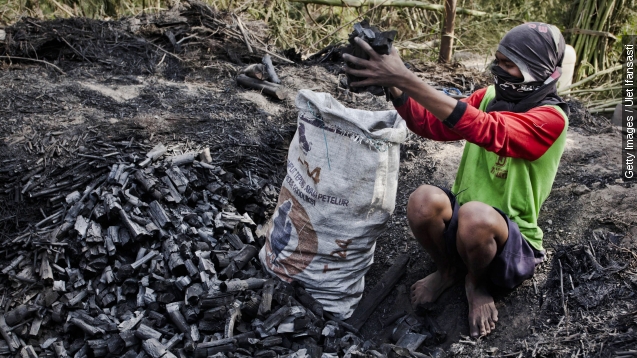 On Monday, Indonesia announced it could cut its emissions by 41 percent by 2030, but there's a catch: It needs $6 billion to do it. (Video via Metro TV)

Otherwise, the sixth-biggest emitter of greenhouse gases says it can only cut 29 percent, considerably lower than other developing countries' targets. (Video via Greenpeace)

But Indonesia's conditional pledge represents one of the biggest problems facing the United Nations climate conference in Paris this December: skepticism. (Video via House of Representatives of Indonesia, French Ministry of Foreign Affairs and International Development)

Specifically, developing countries' skepticism of the developed countries that are largely responsible for the problem.

Leveraging action against aid, therefore, makes perfect sense for developing countries, even if developed countries are in turn skeptical about giving money to corrupt governments.

This is the divide that has haunted these climate conferences for as long as they've been around. (Video via NBC)

But now there's added urgency, as the effects of climate change are bringing the developing world and the developed world closer together. (Video via United Nations)

The Syrian refugees pouring into Europe were driven there not just by civil war but also by the years of drought that preceded it. (Video via Voice of America)

Starting in 2007, Syria faced a punishing drought that led to food shortages and mass unemployment — the worst effects of a drying trend the country's seen over the past 100 years. (Video via Al Jazeera)

Mahmoud Solh, director of the International Center for Agricultural Research in the Dry Areas, points to "this migration crisis as the canary in the mine on climate change. ... The long-term solution is clear: give rural people the ability to remain productive and employed in their own settings." (Video via German Plant Breeders Association)

The added pressure of hundreds of thousands of refugees on Europe's doorstep could push both sets of countries closer to compromise.