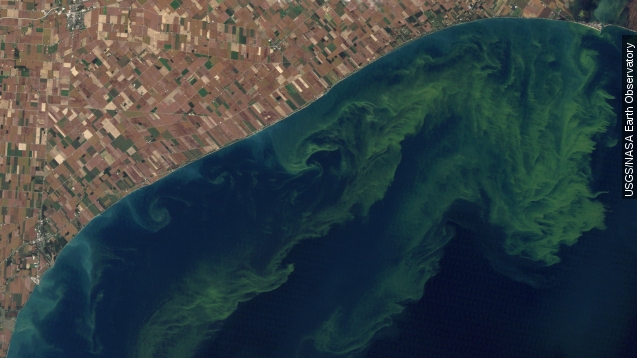 SMS
The Big Problem With Lake Erie's Big Algae Blooms
By Evan Thomas
By Evan Thomas
July 11, 2015
Algae blooms aren’t just slimy — they can throw entire ecosystems out of balance and poison humans and animals that come into contact with them.
SHOW TRANSCRIPT

Researchers at the University of Michigan and the National Oceanic and Atmospheric Administration warn Lake Erie is looking at one of the most severe algae blooms in recent years.

The enormous bursts of greenery are thanks mostly to cyanobacteria, which aren’t actually algae at all, but single-cell bacterial organisms that run on sunlight and nitrogen. And for such tiny things, they can cause big problems. (Video via Lake Erie Center)

Cyanobacteria cause dead zones in both fresh and saltwater. When a bloom dies it absorbs all the oxygen in the water. The bigger the bloom, the greater the oxygen drain.

This throws the rest of the ecosystem out of balance. Fish and other animals that can move to richer waters leave the area, everything else runs the risk of dying due to oxygen depletion. (Video via NOAA)

Certain variants of cyanobacteria are also toxic to humans and animals. Last month, one such bloom on the Pacific Coast caused seizures in sea lions. (Video via NBC)

NOAA therefore warns against swimming and boating in high concentrations of algae, or drinking water where blooms occur.

Last year’s bloom on Erie, for example, was enough to shut down water supplies in Toledo, Ohio. (Video via Newsy)

And on paper, at least, this year’s bloom is shaping up to be even more significant. UM researchers are awarding Erie’s 2015 outlook an 8.7 on a scale of 10, where 10 is the worst bloom ever recorded. Last year was a 6.5.

They blame the worsening conditions on industrial runoff — specifically, fertilizer.

Reducing those emissions is key to cutting down on harmful blooms. In the meantime, NOAA runs a bloom tracker, updated twice weekly with the latest imagery from NASA satellites.