The Best Viral Stories Of 2015 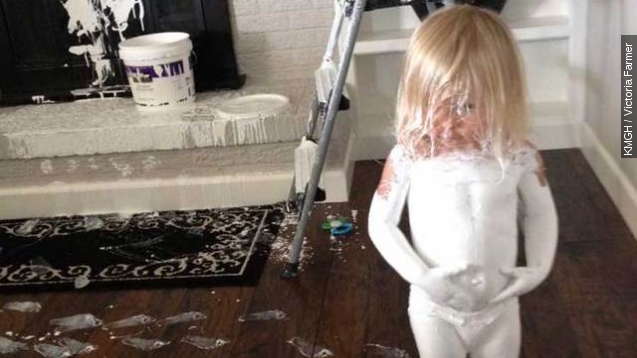 "It's Elsa," Ricky Doyle said in the video.

Or maybe we've all just gotten better at capturing things at the right moment.

We've rounded up the six best viral stories from 2015.

No. 6 goes to a little girl named Iris. She loves CVS.

So much so that she requested a CVS-themed birthday party.

"Why do you love CVS so much?" Iris' mom asked.

"Because of the snacks and chocolate milk," Iris said.

So Iris' mom, Sarah Fortune, threw the best, and possibly first-ever, CVS birthday party. The store even sent goody bags once it heard about its little fan.

"I'm ready to be a superstar!" Iris said in an Instagram video.

For No. 5, after a man lost his cell phone on a float trip, some firefighters found it and decided to take a break from battling the flames to hijack his Facebook account.

"I thought maybe a friend or somebody was pranking me. ... Lots of people knew that I had lost my phone," Nathan Buhler said.

The results were hilarious. Buhler's phone, which was named Hector Sanchez, got to ride in a fire truck, used a fire hose, helped make lunch and even pumped some iron. All in a day's work.

Buhler went to the station to get his phone back and met with the rather giddy pranksters.

But not before his phone won a match of pingpong. Phone's got talent.

Little Anistyn's mother, Victoria Farmer, told Newsy's partners at KMGH her 2-year-old daughter submerged herself in a bucket of white paint they were using to paint their home they wanted to sell.

Victoria said she knew something might be awry when things seemed a little too quiet while she breastfed her son.

Wisconsin photographer Sharee Schock, who is also the mom of the 15-year-old girl in the picture, was taking photos for homecoming.

Schock told BuzzFeed her husband said jokingly that "he would do to the boyfriend whatever was done to our daughter."

And he clearly wasn't kidding!

No. 2 is definitely the most ridiculous on the list since it involves a dead raccoon, posthumously named Conrad.

A concerned citizen tweeted to the City of Toronto about a dead raccoon on the sidewalk.

It took about 12 hours for animal control to get the raccoon, so naturally a memorial started in the meantime. Clearly, the raccoon died too soon. He even got a flower. And a framed photo. And ... well, lots of stuff.

At No. 1, a tearjerker. Ninety-five-year-old daily listener Bill Palmer called in to BBC Radio Solent during a morning show — here come the tears — because he was lonely since his wife was in a nursing home.

Host Alex Dyke decided to bring Bill on the show and sent a cab over to get him.

While there, Bill got to talk to listeners who called in, plus he was spoiled with coffee, donuts and his fave tunes.

We want to know what your favorite viral story of the year was. Tweet us @NewsyVideos.