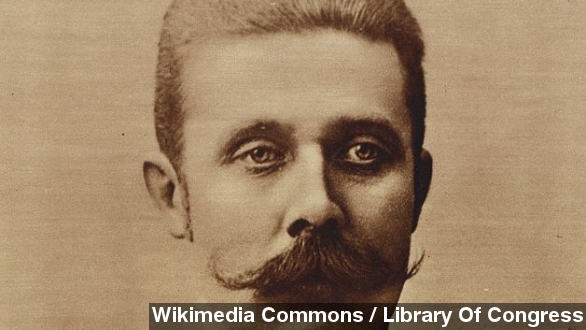 By Matt Picht
June 27, 2014
On June 28, 1914, Archduke Franz Ferdinand was assassinated by Gavrilo Princip in Sarajevo. The consequences of that killing would erupt into WWI.
SHOW TRANSCRIPT

​One hundred years ago, on June 28, 1914, a 19-year old Bosnian Serb named Gavrilo Princip shot and killed Austrian Archduke Franz Ferdinand and his wife in the town of Sarajevo, in what would go down as one of history’s most infamous assassinations.

"Princip's two rounds of pistol fire would detonate millions of rounds of cannon fire from one end of Europe to the other. The assassination had changed a charmed world into a cursed one." (Via The Biography Channel)

Ferdinand's death prompted the Austrian Empire to declare war on Serbia, which unleashed a complex chain of alliances and declarations of war, setting off World War I and four years of bloody, horrific fighting.

Saturday marks the centennial of Ferdinand's assassination, and the world is commemorating the grim anniversary in several different ways.

E.U. leaders gathered in Ypres Thursday, a Belgian town decimated by World War I, in a ceremony to remember the fallen. More than 16 million individuals are believed to have lost their lives in the fighting. (Via Channel 4)

Sarajevo itself is commemorating the centennial with a series of different events, which began June 22 when the city hosted a cycling grand prix. (Via  CTV)

And several news outlets, and at least one Twitter feed, are planning to live-blog the events of Ferdinand's assassination as though it was happening today. (Via BBC)

The occasion has also sparked several thoughtful articles musing over the spiraling consequences of Ferdinand's assassination. A Businessweek writer says "[The lessons] of World War I are clear: Keep local conflicts local; communicate; avoid escalation, even if that means letting down a putative ally."

But the lessons of the past aren't as settled in Princip's homeland, where the assassin's legacy is still hotly debated.

Sarajevo is now the capital of Bosnia and Herzegovina, a nation which split from Yugoslavia at the start of the Bosnian war in 1992. (Via ABC)

One Sarajevo resident told Newsweek Princip’s actions reflect Bosnia’s recent struggle for independence. "For me, he's a hero. That's what we learned at school, before the war. Princip was a freedom fighter. His country was under occupation."

But not all Bosnians view the assassin in such a positive light.

"The killing of the archduke and his wife was just a murder. A plain assassination." (Via Radio Free Europe / Radio Liberty)

The issue is so divisive, The New York Times reports tensions flared up about Princip's legacy during a scholar's conference in Sarajevo about the causes of World War I. "Some Serb political leaders have accused the conference of bias … laying the blame for the war, which claimed 37 million lives, at their feet."

While Ferdinand was assassinated on June 28, World War I didn't officially start until one month later on July 28, when Austria-Hungary declared war on Serbia.