The Army And Marines Start Phasing Out Humvees For New Rides 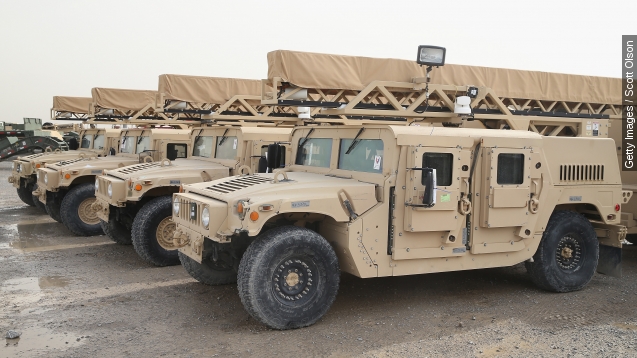 SMS
The Army And Marines Start Phasing Out Humvees For New Rides
By Leah Becerra
By Leah Becerra
August 25, 2015
Oshkosh Defense won a $6.75 billion contract to replace a large chunk of the Army and Marine Corps Humvee fleet.
SHOW TRANSCRIPT

The U.S. Army and Marine Corps are replacing a big chunk of their Humvee fleet and getting new wheels over the next 25 years.

A $6.75 billion contract to replace the aging workhorses was won Tuesday by Oshkosh Defense. The manufacturer will have to build approximately 17,000 Joint Light Tactical Vehicles.

The president of Oshkosh Defense said, "Our JLTV has been extensively tested and is proven to provide the ballistic protection of a light tank." Plus, they're more mobile and faster than the Humvees they'll be replacing. (Video via Oshkosh Defense)

Bloomberg reports spending on the new vehicles this year is around $230 million, but if the budget for the new deal is approved, it will double in 2016 and eventually grow to $1.8 billion per year by 2020.

There were only two other companies competing for the contract, Lockheed Martin Corporation and AM General, the company that makes the Humvee.

This video includes an images by Getty Images.