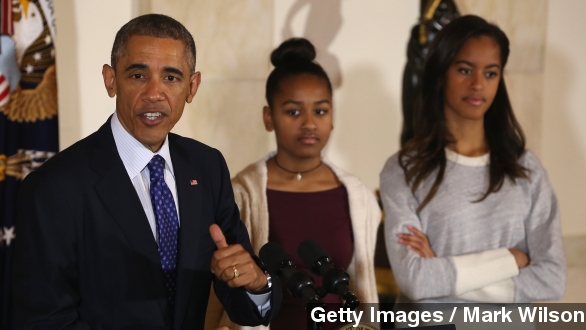 SMS
The Annual Turkey Pardon Is Pretty Silly
By Christian Bryant
By Christian Bryant
November 26, 2014
The Obama family, like the rest of the country, doesn't take the annual pardoning of a Thanksgiving turkey too seriously. But that's part of the fun.
SHOW TRANSCRIPT

"It is a little, uh, puzzling that I do this once a year," President Obama said from The White House.

We feel you, Barry.

Every year on the day before Thanksgiving, the U.S. president pardons a turkey — essentially sparing it from being enjoyed with a side of cranberry sauce and stuffing.

But to us, the turkey pardon just keeps coming across as sillier and sillier. And we're not alone.

Take a look at this video from 2009. A then dark-haired Obama, flanked by daughters Malia and Sasha, might've actually enjoyed the pardon.

Contrast that with this year. It's a pretty dismal situation when the president says he's puzzled by the tradition he's carried out for the past six years. Oh, and just look at Malia and Sasha.

The annual pardon has been around for decades. According to The White House, President John F. Kennedy might've been the first to send the ceremonial turkey back to the farm where it was raised, but it was President George H. W. Bush who actually extended a turkey "pardon."

Still, that doesn't get to the deep-fried white meat of why the practice keeps hanging around.

A scholar from the Hastings Center in Garrison, N.Y. gave his theory to The Washington Post. "It’s a tiny signal of restraint and moderation on a day that, at least at my house, is about getting as much as possible into the oven."

But between "amnesty" and "executive action" jokes, the U.S. commander in chief offered another opinion as to why the pardon still continues.

"With all the tough stuff that floats around in this office, it's nice just once in a while to just say happy Thanksgiving."

And that's something we can get behind — even if the ceremony is pretty silly. This year's turkeys, "Mac" and "Cheese," were sent to Morven Park in Leesburg, Virginia where they are expected to live full turkey lives.

This video includes images from The White House and Getty images.