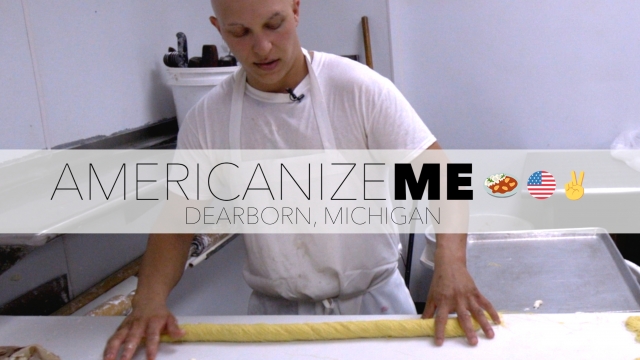 SMS
How Middle Eastern Bakeries Found A Place In America's Rust Belt
By Noor Tagouri
By Noor Tagouri
October 6, 2016
We're getting a taste of the melting pot and exploring the stories behind our multicultural food in the Newsy original series Americanize Me.
SHOW TRANSCRIPT

Dearborn, Michigan, has one of the highest concentrations of Arabs outside the Middle East and North Africa region. So when you're looking for halawiyat, or Arabic sweets and pastries, this town is the place to be. In this episode of "Americanize Me," Newsy's Noor Tagouri met with a Palestinian-American and a Lebanese-American who both continue the traditions of their fathers, who brought sweet tastes of the Arab world to the states.

And what better way to get a slice of the homeland than with a piece of kanafa? Think of kanafa as the Arab version of a cheese danish. It's a pastry filled with stringy cheese or cream and soaked in a rosewater syrup or honey. At Masri Sweets, the recipe dates back generations. Khaldon Masri told us his family's story.

"My father was an accountant in Arizona. And after a while, he decided, 'I don't want to do this anymore; I want to do something else,' and he came back to his roots in Dearborn," Masri said. "So, when he came into the picture, he only had one thing in the back of his pocket: the kanafa. And everyone loved it. ... But it's getting the people's attention in what we make, you know, having a Palestinian in Dearborn back in the '80s ... you didn't see a lot of us. He developed a sense of home here. So now when you go anywhere in Dearborn and you ask, 'Where can I get the best kanafa?' ... they'll point to us."

SEE MORE: Why Many Arab-Americans Check 'White' On The Census

So who came up with the recipe?"My grandfather," Masri said. "I never had a chance to meet him. He passed away when my father was young. But I love talking to my dad about stories — how he made kanafa and, back home, how life was without the technology we have now. It always starts with one person letting another person try it. One person will be like, 'How did you have kanafa?' And they're like, 'Well, my friend let me try it one time,' and that's how it starts, how it spreads so fast. If you were to explain kanafa in a few words, you'd be like, 'It's an upside-down sweet cheese pizza?' It's hard to explain until you have it. "I like making kanafa. I like making everything because I make everything from my heart. People who grew up in the Middle East grew up on kanafa, grew up on pastries of the Middle Eastern culture, they can come and experience it here. In time, it'll be spread more and more and more so kanafa will almost sound like a latte to some people. Everyone knows what a latte is, so hopefully one day everyone will know what kanafa is without explaining it. You can always come back to Masri Sweets and have kanafa when you stop in town. You're leaving with a piece of Dearborn and a piece of Nablus at the same time."

And you can't say you've gone to Dearborn without stopping at Shatila Bakery. What was once a small Lebanese pastry shop is now a common name in thousands of American homes.

From its baklava to its traditional Lebanese ice cream, this bakery is one of the first that ever grew roots in Dearborn. People from all over the world have had a taste of Shatila.

"My dad immigrated here from Lebanon in 1976," said Nada Shatila, vice president of Shatila Bakery. "He had a dream of starting the first Arab-American bakery because when he first came, there were some immigrants coming in from Lebanon, but not that many. In Lebanon he was always very into Mediterranean [and] Middle East sweets, pastries, baklava, kanafa, all of that. He always had a passion for it from the beginning, and what kept him really committed here was the fact that he saw it as a really viable family business to start — a way to get food on the table and a way to really connect with the community."

Shatila said she traveled to Lebanon when she was 13 and remembers trying the ice cream there. "We stopped by a little ice cream shop, and I was surprised because I thought it was exactly the same thing as the ice cream we have here. You know, my dad kept it as authentic as possible — the taste of home," she said.To her, Shatila Bakery's ashta (rosewater) and pistachio flavors taste the most like Lebanon."I think it's a really important thing to spread my dad's legacy and to spread the message of the Middle Eastern culture in such a positive light, and I really want it to connect people all over the world. The nice thing about being in the food business is that it definitely unites everyone. Nobody discriminates against food."

For more episodes of Newsy's "Americanize Me," check back every Thursday.