This Is How A Cartoon Frog Became A Hate Symbol 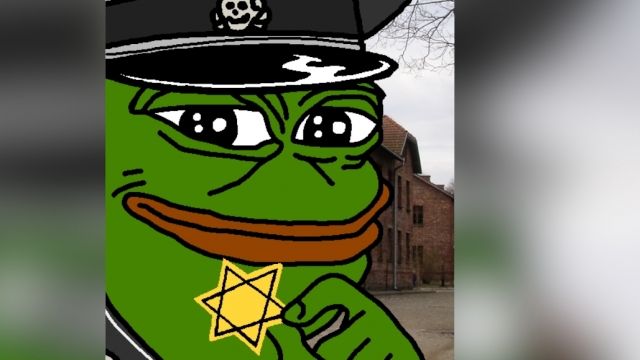 Meet Pepe the Frog. He's the latest symbol to be added to the Anti-Defamation League's hate symbols database.

Yes, Pepe — who has also come to be known as Sad Frog — joins the ranks of the swastika and "14 Words."

The ADL said the recent rise of the alt-right — especially in the wake of the presidential election — has led to the creation of more racist and anti-Semitic Pepe memes.

The frog was born in 2005, one of the four cartoon characters featured in Matt Furie's mainstream "Boy's Club" comic.

In his infancy, Pepe was basically depicted as a stoner, saying the phrase, "Feels good, man."

He then became a popular internet meme — even shared by celebrities.  According to CNN, Pepe the Frog was "one of the biggest memes on Tumblr in 2015."

But like some kids do when they grow up, Pepe fell in with the wrong crowd.

Commenters on bigoted, racist and anti-Semitic threads in online forums like 4chan, 8chan and Reddit transformed Pepe. He went from teenage stoner frog to various symbols of hate, including Hitler and a Ku Klux Klan member.

Within the last year, the meme has gained more visibility by appearing on Twitter under the hashtag, #FrogTwitter.

It was even retweeted by Donald Trump and later shared by his son on Instagram, prompting the Clinton campaign to denounce it.

Furie has said he doesn't have strong opinions on the alt-right's use of the cartoon, calling it "a phase."

But not all Pepe memes are hateful. The ADL said it's important "to examine use of the meme only in context."