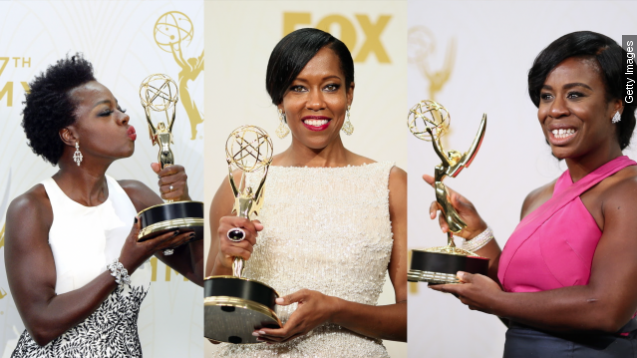 By Jamal Andress
September 21, 2015
The only other time more than two black women took home Emmys in one year was 1991 when Debbie Allen, Madge Sinclair, Ruby Dee and Lynn Whitfield won.
SHOW TRANSCRIPT

This year's Emmy Awards Show was dominated by black actresses.

Regina King won Outstanding Supporting Actress in a Limited Series or a Movie for "American Crime."

"Orange Is the New Black"s Uzo Aduba won the Emmy for Outstanding Supporting Actress In A Drama Series.

"How to Get Away with Murder" star Viola Davis took home the Emmy for Outstanding Lead Actress In Drama Series.

1991 is the only other time more than two black women took home Primetime Emmy Awards in one year.

That year's winners include Lynn Whitfield for "The Josephine Baker Story," Madge Sinclair for "Gabriel's Fire," and Ruby Dee for "Decoration Day."