The 113th Congress Failed, No Matter How You Judge It 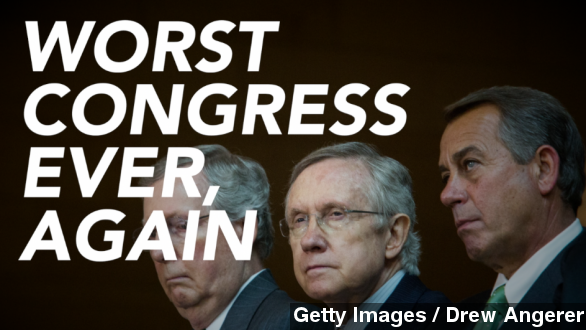 How do you measure the success or failure of Congress? (Video via The White House, CNN and NBC)

By many metrics, the 113th Congress was truly terrible — and unproductive. Through 2013 and ‘14, it passed 203 bills into law. That’s the fewest on record, fewer than even last year’s all-time-low total.

And it’s about one-fourth of the bills passed by Harry Truman’s “Do-Nothing” Congress.

TRUMAN: “Congress has still done nothing.” (Video via C-SPAN)

Oh, and about 10 percent of this past session’s bills just awarded medals or named things.

Of course, if you like small government, you probably wouldn’t rate Congress’ success by how many laws it passed. You’d rate it like this.

So, how many laws did Congress repeal this year? Actually, zero. No success on that front either.

When Ted Cruz led a government shutdown in October 2013, Congress lost half of the little public support it had left. (Video via C-SPAN)

The 113th session ended 2014 with a 15 percent approval rating. That barely topped last year’s all-time low at 14 percent. And 65 percent of Americans say this Congress is the worst Congress in their lifetime.

But here’s another stat for you. 95 percent of incumbents running in November’s midterms were re-elected. Because voters say lawmakers are the problem — just not their lawmaker.