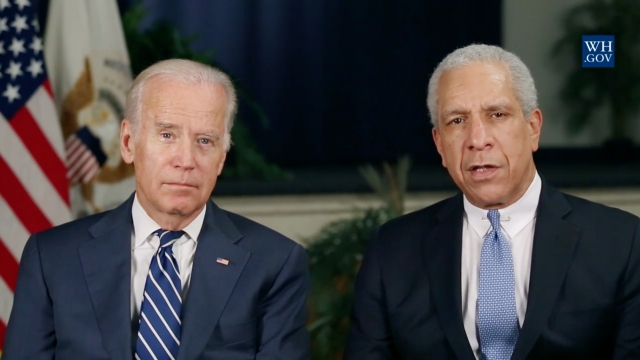 The conventions are over, and it looks like it's time for the White House to turn its attention to another matter: the fact that Judge Merrick Garland still hasn't had a confirmation hearing for a seat on the U.S. Supreme Court.

In the White House's weekly address, Vice President Joe Biden and Federal Judge Timothy Lewis made the case for Garland to at least get a hearing.

"The sitting president shall — not may — but shall nominate someone to fill a vacancy on the Supreme Court with the advice and consent of the Senate," Lewis said.

"Nobody is suggesting that senators have to vote 'yes' on a nominee. Voting 'no' is always an option for any senator. ... Deciding in advance simply to turn your backs — is not an option the Constitution leaves open," Vice President Biden said.

In July, Garland set the record for the longest wait for a Supreme Court hearing and beat out Louis Brandeis who waited 125 days back in 1916.

After Justice Antonin Scalia died, prominent Republicans began arguing that a Supreme Court nominee shouldn't be confirmed until after the November election.

Garland wouldn't be the first justice confirmed to a judicial post in an election year. As Biden points out, Lewis is living proof of that, having been confirmed within four weeks of a presidential election.

But Lewis was never on the Supreme Court. The last time a Supreme Court nominee was confirmed in an election year was Benjamin Cardozo in 1932.

The biggest issue that Biden and Lewis highlight is the threat of 4-4 ties in the Supreme Court. When that happens, decisions revert to what the lower court decided.

"Unresolved decisions by the Supreme Court are leading to federal laws that should apply to the whole country being constitutional in some parts but unconstitutional in others," Lewis said.

But, as with most things in politics, this address is unlikely to sway those who've already made up their minds. The last time a Senate Republican met with Garland was back in May, and Garland is still waiting for that hearing.

This video includes images from Getty Images and Library of Congress and clips from the White House and PBS Newshour.