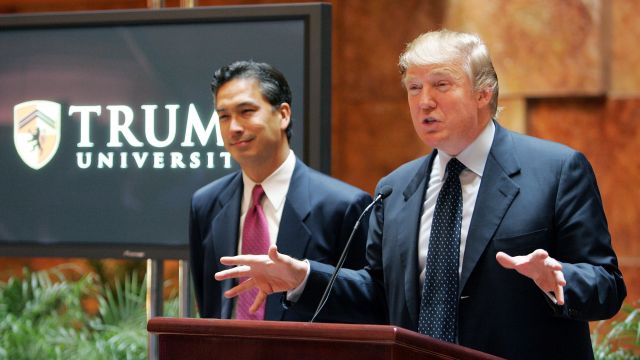 SMS
That Trump University Lawsuit Won't Leave Trump Alone
By Katie Link
By Katie Link
February 23, 2016
Donald Trump could be called away from the campaign trail to serve as a witness in a civil lawsuit brought against him.
SHOW TRANSCRIPT

Once upon a time, Donald Trump had a university. He named it "Trump University" but later changed it to "Trump Entrepreneur Initiative" because it wasn’t a real university.

Rather, people could pay thousands of dollars to attend seminars in entrepreneurship and real estate. Fast-forward about 10 years, and now that "initiative" has folded and Trump is facing accusations of financial fraud.

The civil lawsuit is back in the limelight thanks to recent court filings that indicate Trump will be called as a witness in the case. And according to Yahoo, that case could be up for review in San Diego soon.

It’s not exactly a convenient time for Trump to step off the campaign trail. Politico reports the trial could move forward after May 6, which could interrupt scheduled primaries taking place that month.

Trump has repeatedly denied any wrongdoing.