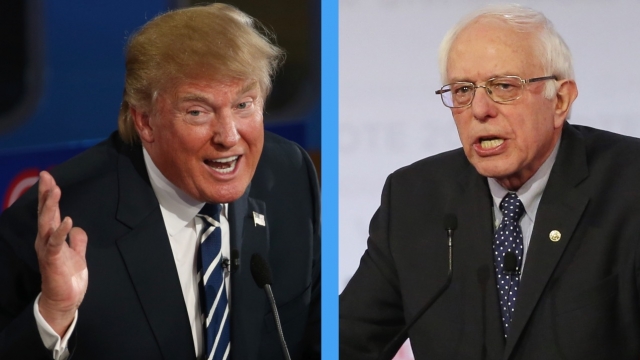 Bernie Sanders might debate Donald Trump. Key word: "might." And if that debate seems tailor-made for entertainment, it sort of is.

After Hillary Clinton declined a debate in California against Sanders, the senator from Vermont called out Donald Trump when the businessman appeared on "Jimmy Kimmel Live" on Wednesday.

"Are you prepared to debate the major issues facing our largest state and the country before the California primary, yes or no?" Kimmel said, quoting Sanders.

Trump added the money would go to charity. Sanders responded quickly, tweeting: "Game on. I look forward to debating Donald Trump in California before the June 7 primary."

The Trump camp doesn't seem as serious. Campaign sources are already telling CBS that Trump was joking about the debate. But if the matchup did happen, it could be a good thing for both candidates — in very different ways.

Sanders trails Clinton for the Democratic nomination, while Trump is the presumptive Republican nominee. Taking on the leader for the GOP's ticket could give Sanders some serious clout.

On the flip side, Trump has been trying to woo Sanders supporters away from the Democratic ticket, and he could use the debate to show them what he and the Vermont senator have in common.

Republican debates featuring Trump have broken viewership records. It's not a stretch to guess millions would tune in to see this matchup between the parties' self-described outsiders.

Sanders is slated to appear on Kimmel's show Thursday night.