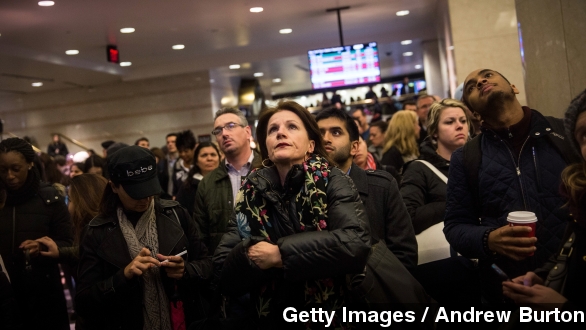 It has become the perfect storm: a massive Nor’easter has hit the Northeast and Mid-Atlantic, ruining travel plans and turkey dinners for millions of Americans.

Consumer Traveler names the day before Thanksgiving as the “single-busiest travel day of the year” for the United States, compounding the storm’s impact.

In fact, AAA estimates that 46 million Americans attempted to hit the road or air to reach loved ones this Thanksgiving.

But rain, snow and sleet on the east coast have cancelled 700 flights and delayed 7,000 more.

Even families arriving at their intended destination found many relatives in the darkness: as of Thanksgiving morning, more than 400,000 people were without power across 12 states. (Video via MSNBC)

Highest totals were in New Hampshire, where as many as 200,000 homes lost power.

The Portland Press Herald in Maine reported about 90,000 power outages, noting that Canadian crews are being brought in to help out with storm damage.

Another complicating factor arises from a positive place: gas prices are dropping, meaning more people are attempting to travel for the first time since 2007. (Video via WCCO)

The forecast for the rest of the holiday is improving, with light snow ending on the east coast and most flights now running on time.