Thanks To Some Shipments Of Snow, Alaskan Iditarod Dog Sled Race Is On 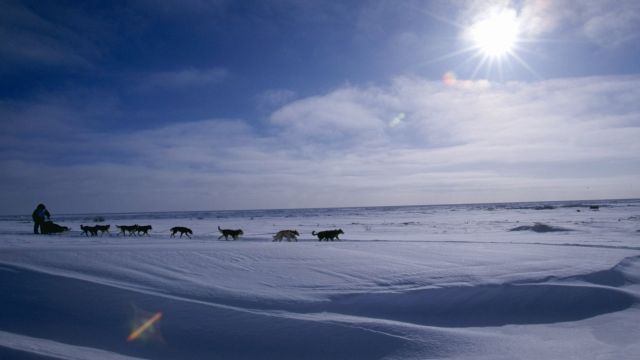 SMS
Thanks To Some Shipments Of Snow, Alaskan Iditarod Dog Sled Race Is On
By Katie Link
By Katie Link
March 3, 2016
Officials brought in seven rail cars plus 1,000 truckloads of snow to prepare for the ceremonial starting leg of the race in Anchorage.
SHOW TRANSCRIPT

Officials in Anchorage, Alaska, have an unusual snow problem. They also have a strange snow solution.

Seven rail cars packed full of snow arrived in Anchorage on Thursday morning ahead of the annual Iditarod dog sled competition. And those seven rail cars of snow are in addition to the 1,000 truckloads already gathered.

Unseasonably warm temperatures forced event organizers to outsource for their snow this year — a cost that, apparently, is budgeted as a part of regular street maintenance in the city.

For the rest of us who see big bucks go toward the removal of snow from our streets, a $60,000 budget for bringing in snow ahead of dog races seems a little absurd.

But the famous Iditarod competition is tradition that dates back more than 40 years. It brings hundreds of dogs, and people, to the ceremonial starting line. And this year, the view from the starting line is looking a little different.

Race leaders also had to shorten the starting leg of the race from 11 miles to 3 miles because of the lack of snow. But organizers are confident spectators won’t be able to tell the difference.

One race organizer told NBC, “Race fans concentrated in downtown Anchorage will not notice any changes to the race start, as the excitement of having more than 1,000 of the most finely tuned sled dogs in the world will, as always, make for an electric environment.”

This video includes clips from Alaska Dispatch News and Discovery and images from Getty Images.