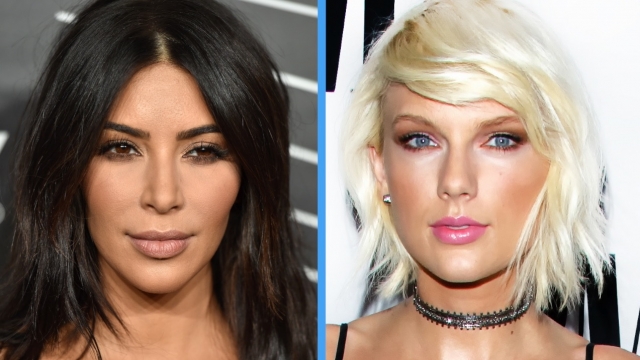 "Go with whatever line you think is better. It's obviously very tongue-in-cheek either way. And I really appreciate you telling me about it. That's really nice," Taylor Swift supposedly said.

The beef between Kim Kardashian West and Taylor Swift over lyrics in Kanye West's song "Famous" just reached another level.

The battle over that lyric has been going on for months. Kardashian West and her husband have said Swift approved the line.

On Sunday night, Kardashian West told the Twitterverse to follow her on Snapchat. And she snapped what she said is a phone call between her husband and Swift.

"I'm like, this close to over exposure," Swift responds.

"I know, it's like a compliment kind of," Swift says.

Swift has maintained she never approved the lyric, "I made that b**** famous.”

Swift responded Sunday night on Twitter, saying, in part, "Where is the video of Kanye telling me he was going to call me 'that b----' in his song? It doesn't exist because it never happened."

She also said West promised to play the song for her but never did.

Later in the tweet, Swift said, "Being falsely painted as a liar when I was never given the full story or played any part of the song is character assassination."

Kardashian West's Snapchat video was posted the same night a "Keeping Up With the Kardashians" episode addressing the beef aired.

"I'm just, like, speaking the truth. Like, he called her. Spoke to her. She even helped him, like, rewrite. It's so wild," Kardashian West told her sister, Kourtney.

Kardashian West claimed Swift was playing the victim and said, "It definitely got her a lot of attention the first time," referencing the time West hijacked Swift's 2009 MTV Video Music Awards acceptance speech.