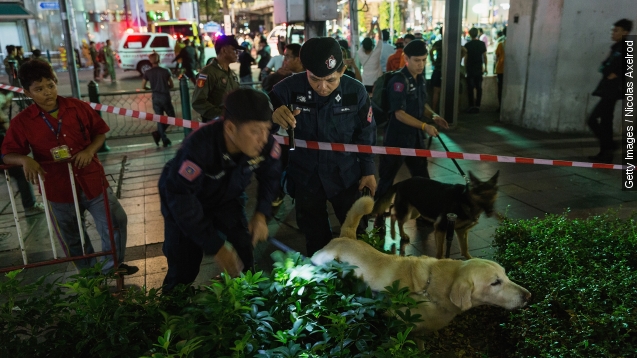 SMS
Thai Police Hone In On Bangkok Bombing Suspect
By Ryan Biek
By Ryan Biek
August 18, 2015
Thai police are looking for a man they suspect to be involved in Monday's bombing in Bangkok. Surveillance video seems to show him leave a backpack.
SHOW TRANSCRIPT

Thai police are searching for a man they believe to be connected to Monday's bombing near a shrine in Bangkok.

The suspect was caught on CCTV footage near the shrine wearing a backpack. Then he was seen again later without the backpack.

At least 20 were killed in the attack, with nine of the dead being foreigners. Thailand's prime minister suspects the bomb was targeting tourists. (Video via Thai PBS)

On Tuesday there was a second explosion after an explosive was thrown from a bridge in Bangkok. No injuries were reported, and a connection between the two hasn't been established.

No one has claimed responsibility for either bombing.

An analyst told the BBC terror networks usually do so, and said it's unlikely Muslim separatists are to blame as they've never attacked Thailand's capital.