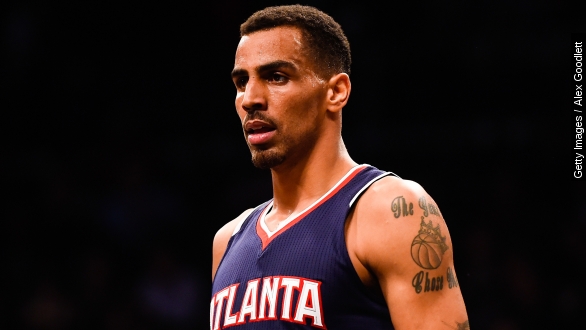 Atlanta Hawks player Thabo Sefolosha addressed the media for the first time Tuesday following a fight at a New York City night club last week that led to his arrest and a season-ending leg injury.

In a statement recorded by The Atlanta Journal-Constitution and other media outlets, Sefolosha expressed gratitude to his supporters.

He added that he was "extremely disappointed" he'd have to sit out the playoffs and blamed police for his injury.

This all stems from an incident last week when Indiana Pacers forward Chris Copeland and two women were stabbed by a man after an altercation outside 1 Oak nightclub in New York City. (Video via WCBS)

Sefolosha and his Hawks teammate Pero Antic were both at the club at that time. This footage obtained by TMZ appears to show police wrestling Sefolosha to the ground during a confrontation outside the complex.

Both Sefolosha and Antic were arrested following the incident. Officials allege the two Hawks players obstructed the police investigation into the matter.

But as an ESPN.com report points out, the arrests "appear to be more than 100 feet from the site of Copeland's stabbing." And, ESPN's Michael Smith also thinks the NYPD might've gone too far to apprehend Sefolosha.

"The behavior on the part of law enforcement. Look, again, I know what they're accused of doing, what they're doing here in terms of obstructing justice or whatever. But it looked like, once again, too much excessive force," ESPN's Michael Smith said.

According to sources for ESPN, the Internal Affairs bureau of the NYPD has also reached out to Sefolosha to interview him as "a complaining witness" in the incident.

Even without Sefolosha, the Hawks are still the No. 1. seed in the Eastern Conference heading into the NBA playoffs, and the role player's season-ending injury probably won't ruin their chances at the title.

But as NBC puts it: "Imagine if a player like Stephen Curry or LeBron James, for example, had their season similarly ended during an incident with law enforcement — the discussion would be endless, and would never leave the news cycle."