Text 'Magic' To Get Whatever You Want 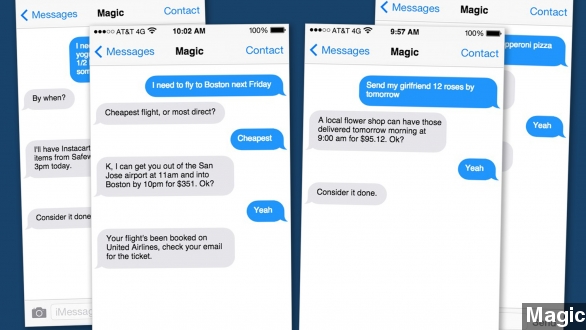 Who says you need an app to create the next big thing in tech? Yeah, there are nearly 8,600 people trying to gain access to a service that’s based in text messages.

This is Magic, a new on-demand service that’s gaining popularity because we’re all lazy … or incredibly busy, who are we to judge?

So how does Magic work? Well, if you’re in the U.S., you send a text message to the number on the site and (if there aren’t 9000 people in front of you) you register your information: name, address, credit card number, etc.

Magic uses payment-processing service Stripe to handle your credit card details, so your CC is invisible (haha) to Magic employees.

Once all the details are plugged in, you’re good to go. Ask for anything ("as long as it’s not illegal"), and Magic’s trained operators figure out the rest. Magic says its fees and tips are all included with the final quoted price.

So that’s Magic. We have to say it’s somewhat reminiscent of ChaCha — you know, where you’d text 242242 and ask people for answers to your test questions.

Mashable was able to snag an interview with Magic’s creator. Turns out the service was once a “side project,” but not so much anymore.

“It topped 10,000 incoming messages on Sunday and was closing in on 18,000 Monday morning. Magic's team of magicians on call … grew from two or three at launch to 18 on Sunday.”

The outlet says someone’s already requested a tiger via Magic … like a real life, buffalo-mauling big cat. Another customer needed help in court. And one just needed a bike wrench. (Video via National Geographic)

We’re still pondering the service’s sudden popularity — it just launched over the weekend — but when you consider its simplicity, it starts to make sense.

Remember “Yo”? The app does nothing more than send a notification to another user, and it still raised $1 million and onboarded a whopping 50,000 users shortly after launch.

Combine simplicity with convenience — text someone what you want, answer a few questions and authorize payments — and suddenly you have 9,000 people waiting in line to pay you.