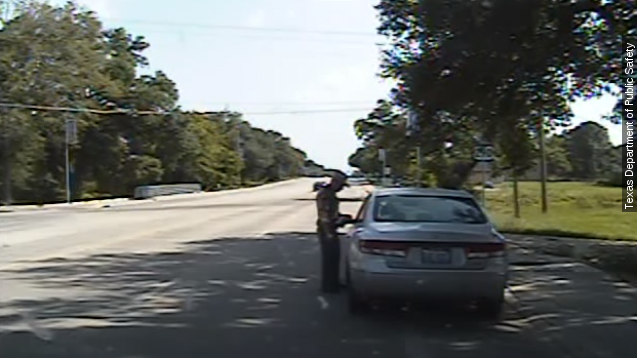 The Texas state trooper who arrested Sandra Bland back in July during a routine traffic stop has been indicted on a perjury charge.

Bland's case gained national attention after she was found dead in her jail cell three days after being taken to the Waller County Jail. Authorities said her death was a suicide, but her family disagreed.

In December, a grand jury decided not to indict anyone in connection to her death.

Now, the arresting officer, Brian Encinia, faces a class A misdemeanor for misrepresenting facts in a one-page affidavit he filed after taking Bland to jail.

One of the special prosecutors on the case told The Washington Post: "He said he pulled Sandra Bland from her car in order to further his traffic stop investigation. The grand jury did not believe that statement to be true."

This is police video of the arrest. Encinia asks Bland to put out her cigarette and Bland refuses.

"Get out of the car. I will light you up. Get out. Now," Encinia says.

"Wow, really? For a failure to signal?" Bland says.