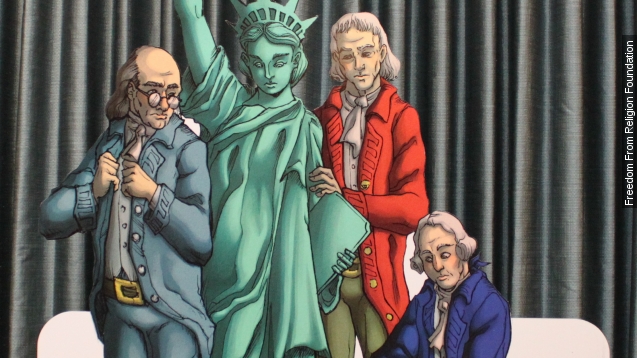 SMS
Texas Removes 'Founding Fathers' Nativity Scene From Capitol
By Melissa Prax
By Melissa Prax
December 24, 2015
Some say removing the nontraditional nativity scene from the Texas Capitol is censorship, while others say the display mocks their religion.
SHOW TRANSCRIPT

A nontraditional take on a nativity scene is causing some controversy in Texas.

This nativity scene from the Freedom From Religion Foundation was taken down from the state capitol building after receiving backlash, including criticism from Texas Gov. Greg Abbott.

In a letter to the state preservation board, Abbott said the nativity scene "promotes ignorance and falsehood as it suggests that George Washington, Benjamin Franklin and Thomas Jefferson worshiped the Bill of Rights in the place of Jesus." (Video via KXAN)

The foundation has similar scenes in other U.S. cities. The organization has also asked towns to remove traditional nativity scenes in the past. (Video via Fox News)

Texas' move to take down the nativity scene hasn't come without backlash, with those supporting the display saying removing it is censorship.