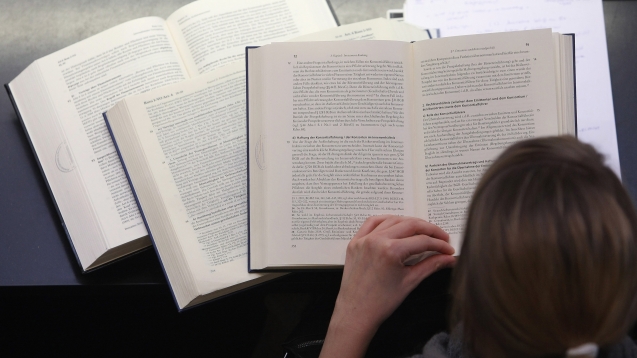 The Texas Board of Education voted 8-7 to reject a measure that would have required university professors and experts to fact check the state's public school textbooks.

Thomas Ratliff, the board member who introduced the measure, said, "I know people are concerned about pointy-headed liberals in the ivory tower making our process different or worse. But I hold our institutions of higher education in fairly high regard."

As it stands, textbooks are subject to a citizen review panel, and that's been a huge problem for Texas, as well as many other states.

The president of the Texas Freedom Network's Education Fund, Kathy Miller, said, "A number of textbook passages essentially reflect the ideological beliefs of politicians on the state board rather than sound scholarship and factual history."

The Lone Star State's textbooks have been roundly criticized for containing ideologically charged inaccuracies. One history book called slaves "workers" from Africa, and former board chairman Don McLeroy was quoted as saying, "The way I evaluate history textbooks is first I see how they cover Christianity and Israel."

That's nationally important, because the lessons Texas is teaching its estimated 5.2 million public school students could spill over to other states as well.

James Kracht, a professor of education at Texas A&M who's involved in the state's textbook process, told The New York Times "Texas governs 46 or 47 states."

Texas has dominated the textbook market ever since it started paying the costs of textbooks in full, as long as the book was approved by the Texas Board of Education. Those books were then mass produced, so other states would piggyback on the large-scale production, buying textbooks in bulk for much cheaper.

The board did make a change though, stating future book review panels should be mostly made up of experts with "sufficient content expertise and experience," but the vagueness of the change has activists unconvinced.