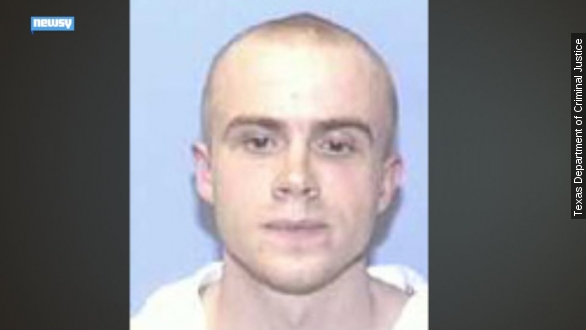 Texas inmate Robert Pruett was given a reprieve hours before his scheduled execution to allow a piece of evidence to be tested for DNA.

Prosecutors say Pruett killed prison guard Daniel Nagle in 1999 after Nagel wrote him up for taking his lunch to a no-food area of the prison.

"He was in denial of anything we would ask him. ... Mr Nagle is dead, and we've got witness that saw stab him," said Chief Investigator Bill Lazenby.

Despite investigators finding Nagle's ripped-up note that mentioned Pruett's violation, Pruett claims he didn't kill him. His current legal team argues the following: no evidence connects the inmate to the killing, evidence that was collected was improperly handled and Pruett's legal representation at the time was insufficient.

"I did not kill Daniel Nagel," Pruett tells KWTX.

While no DNA evidence connects Pruett to the scene, prosecutors say there was no evidence to exonerate him, either. They argue Pruett injured his thumb in the killing, which they say is proof he did it.

Pruett was originally in prison for being an accomplice in another killing that happened when he was 15 years old.

So far, Pruett has not had luck appealing his case to local appellate courts. On Friday, the Fifth Circuit U.S. Court of Appeals refused to delay Pruett's execution. He has also appealed to the Supreme Court.