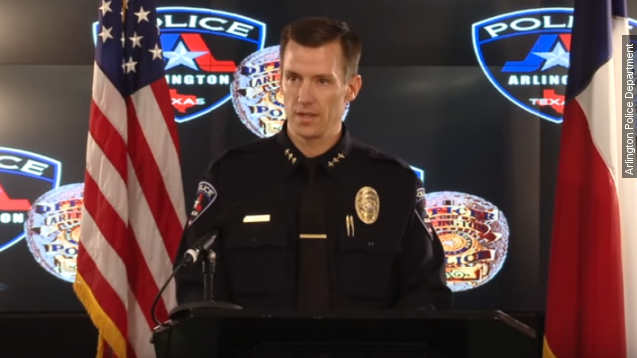 SMS
Texas Police Blame Officer's Judgment For Teen's Shooting
By Christian Bryant
By Christian Bryant
August 11, 2015
The Arlington Police chief fired the officer who shot and killed an unarmed man as the investigation into his death continues.
SHOW TRANSCRIPT

"I have serious concerns as to the rationale articulated for the use of deadly force in this incident," Arlington Police Chief Will Johnson told reporters.

Arlington, Texas, Police Chief Will Johnson has fired an officer who shot and killed an unarmed man, saying the officer made poor decisions leading to the death of a 19-year-old college student.

Newly released surveillance video shows Christian Taylor, an Angelo State University student-athlete, entering a dealership lot and jumping on the hood of a car. Taylor then drove his own car through a dealership showroom. (Video via KXAS)

"Failing to communicate with fellow officers or develop an arrest plan created an environment of cascading consequences that produced an unrecoverable outcome," Johnson said.

There's no video of the shooting as it happened, according to Johnson. But based on testimony of the officers involved, Johnson said Miller fired at least three shots while his supervising officer used a taser.

Johnson said previously the department is trying to be transparent during the investigation, which could be why they released dispatch audio from the August 7 shooting. The description reads, "This audio file contains the police radio communications in real-time with no segments of time removed."

Miller could still face criminal charges. In the meantime, Johnson has reportedly requested $50,000 to buy 50 body cameras for his department.