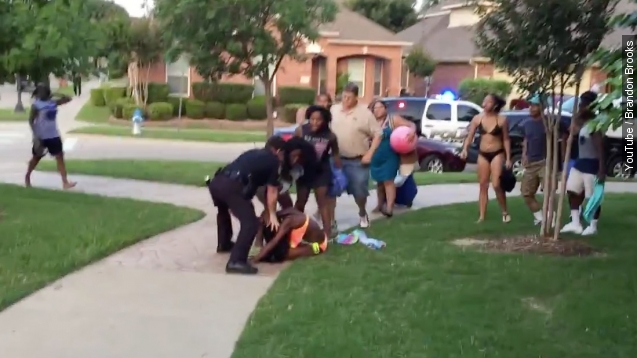 The McKinney, Texas police officer who resigned after a video posted online showing him pinning a girl to the ground and drawing his gun at a pool party apologized Wednesday.

The apology came through his lawyer, who said the officer responded after having his nerves rattled from two suicide calls:

"I want to say to our community that the actions of Casebolt, as seen on the video of the disturbance at the community pool, are indefensible," Chief Greg Conley said. "Our policies, our training, our practice do not support his actions."

Police say they responded to a disturbance call Friday evening at a community pool in McKinney, Texas, after a fight reportedly broke out.

When officers arrived, crowds dispersed. Casebolt is seen yelling commands at several people and forcing a young girl to the ground. The officer also appeared to pull out his gun at one point and aim it at bystanders.

The McKinney Police Department released a statement saying officers responded to a "disturbance involving multiple juveniles at the location, who do not live in the area or have permission to be there, refusing to leave."

Brandon Brooks, the 15-year-old who recorded the video, told BuzzFeed many students had been out celebrating school being out at the community pool and were there on guest passes.

Brooks said, "I think a bunch of white parents were angry that a bunch of black kids who don't live in the neighborhood were in the pool."

The McKinney Police Department has launched an investigation into the incident.