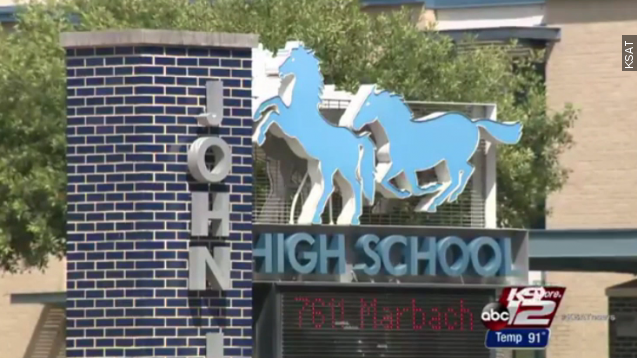 SMS
Texas H.S. Football Players Face Charges After Tackling Ref
By Grant Suneson
By Grant Suneson
September 8, 2015
Two high school football players could face charges after tackling a referee during a game. But how bad does a hit have to be before it's a crime?
SHOW TRANSCRIPT

Two Texas high school football players could face charges after back-to-back cheap shots during a game Friday. But it wasn't against another player. No, they went after the referee.

One player from John Jay High School decked the ref from behind, then another dove into him while he was on the ground. Both were ejected from the game and later dismissed from the team.

"The incident is extremely disturbing. Not the sportsmanlike behavior we teach students," said an NISD spokesman.

Illegal hits are nothing new in football, but taking out an official is shocking. Which raises the question: How bad does a hit have to be before it's considered criminal?

The ref who was hit certainly thinks the line was crossed. A representative for the official said he was "wanting to press charges" and ensure the two aggressors "never play football again."

Violence against officials is nothing to be taken lightly. In 2014 near Detroit, an adult-league soccer referee was killed after a player punched him in the head because he intended to give the player a red card.

Bassel Saad pleaded guilty to involuntary manslaughter and will spend at least eight years in prison. And while the Texas incident wasn't nearly as serious, there will still likely be consequences.

Like in the case in Georgia with Stephens County High School's baseball team — the pitcher launched a high fastball right at the umpire's face and the catcher seemed to miss it on purpose. The school was fined $1,000, and the catcher lost an opportunity to play baseball in college.

So it seems if you go after officials on the field, there will be consequences after the game, no matter what. It's a bit tougher to define a criminal act when both parties involved are players.

Physical competitions can get a bit testy, and there are brawls all the time in professional sports. So you'd really have to do something malicious to another athlete for the law to get involved.

"Steve, I just want to apologize for what happened out there. I had no intention on hurting you, and I feel awful for what transpired," Bertuzzi said. (Video via BCTV)

Luckily, the high school football referee wasn't seriously injured. Officials said they're investigating footage from the game, and a hearing is scheduled for next week.