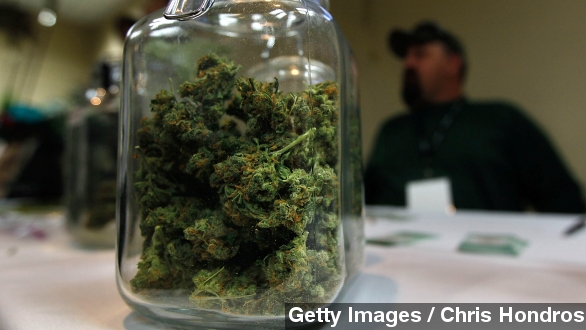 By Ben Lawson
March 23, 2015
Tests of Colorado's legal marijuana have revealed the product is more potent than ever before but also has contaminants.
SHOW TRANSCRIPT

Apparently, when pot becomes legal, it gets more potent. Tests of Colorado's legal marijuana have revealed the product is more potent than ever before but also contains some contaminants.

In the past, marijuana bought at street level typically had THC levels below 10 percent. The retail strains in Colorado had an average level of 18.7 percent, and some even went as high as 30 percent.

A spokesman for the research company said the potency doesn't present any health risks when smoking but that it would be easy to over-consume edibles since the effects aren't as immediate as with smoking. (Video via KMGH)

The lab also found some fungus and chemical butane present in the samples. But researchers aren't sure the levels they found would pose health concerns.

What is concerning is the lack of cannabidiol, or CBD, the compound found in marijuana believed to have medicinal properties.

Some believe CBD can help with depression, anxiety, pain and seizures. (Video via KMGH)

Charas was testing recreational strains, not medicinal ones, so this isn't too surprising. However, a spokesman for the company noted "there is a decent number of people buying retail marijuana who want some medicinal value."