Test Your 'Star Wars' Trivia: The Making Of 'The Force Awakens' 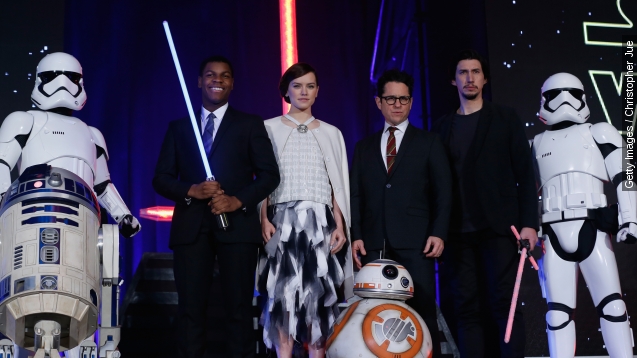 SMS
Test Your 'Star Wars' Trivia: The Making Of 'The Force Awakens'
By Matt Moreno
By Matt Moreno
December 16, 2015
Take this five-question, spoiler-free quiz and see how many questions you can answer correctly about the making of the franchise's newest film.
SHOW TRANSCRIPT

Are you ready for "The Force Awakens?" It's time to test your knowledge.

1. While filming in summer 2014, Harrison Ford broke his ankle on the door of the Millennium Falcon.

"In this one, I dislocated the ankle forward," Ford joked on "The Tonight Show."

About a year later, who else revealed they broke their back while trying to help Ford out from under the door?

"I felt this pop and was like, 'That hurts,'" Abrams said on "The Tonight Show."

"You literally broke your back for 'Star Wars.' That's what I'm talking about. That's dedication," Jimmy Fallon said.

3. The majority of "Star Wars: The Force Awakens" was shot at the U.K.'s Pinewood Studios. (Video via UK Trade & Investment)

What Middle Eastern city served as the second major shooting location? Hint: It was the setting for Jakku.

4. In the second trailer of "The Force Awakens," we got our first look at Captain Phasma, leader of the First Order. What cult horror film did director J.J. Abrams say he got the name "Phasm" from?

5. When the first "Force Awakens" trailer dropped in November 2014, what new, sweaty, out-of-breath character was the first to appear on screen?

Ready for the answers?

Answer them all right? You're ready for "The Force Awakens." If you got one to four right, you just need some more training, padowan. 0/5? Maybe you aren't the chosen one.