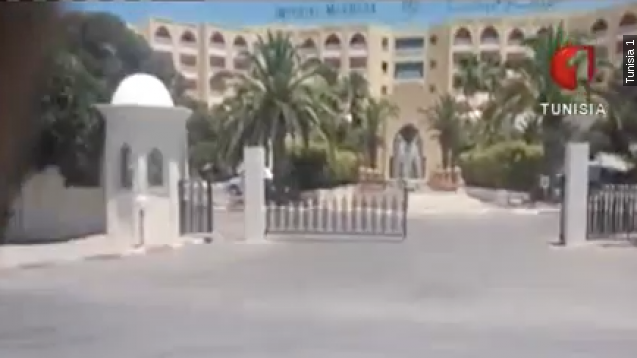 A beachfront hotel is the site of another terrorist attack in Tunisia. Gunmen killed at least twenty-seven people on  Friday — most of them hotel guests.

This is the second such attack on tourists in recent months. In March, gunmen opened fire at Bardo museum in Tunisia’s capital city, killing 22 people.  (Video via Tunisia Interior Ministry)

Like the Bardo assault, Friday’s attack threatens an industry critical to Tunisia’s economy.

Tunisia, like other North African countries including Egypt and Morocco, has long been a popular destination for European tourists.

But the violent uprisings of the Arab Spring in 2011 led to a sharp drop in the number of tourists traveling to the region.  (Video via Al Arabiya)

Tunisia, though, was somewhat of an exception. Unlike its neighbors, it managed to peacefully transition from dictatorship to democracy. (Video via RT)

Today, tourism in Tunisia makes up between 7 to 15 percent of the country’s GDP depending on estimates, so it's clear why it may be a target for terrorists.

As The Guardian’s Libya correspondent Chris Stephen wrote of the Bardo attack: “[It] seems driven by an icy logic: that the leaders they want to depose are too well protected to be easily targeted. Far better to aim for the soft underbelly of a state, in this case the economy.”

ISIS has claimed responsibility for this weekend's attack, warning more attacks may be on their way.

On Friday, ISIS also claimed responsibility for an attack on a Shiite mosque in Kuwait. And in France, one person was found beheaded at a gas factory in what French President Francois Hollande called a “pure terrorist attack.”