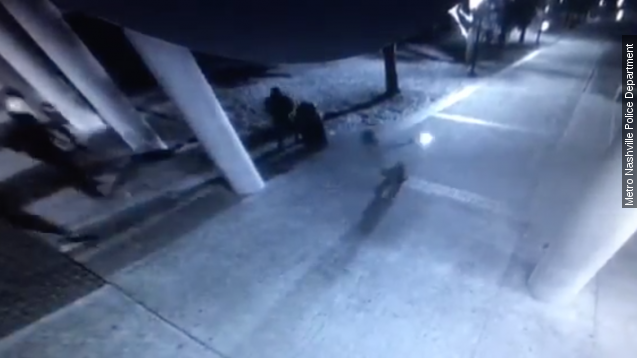 With one man dead and the shooter still not caught, police in Nashville released surveillance video late Friday night of a shooting on the Tennessee State University campus. (Video via WTVF)

The video shows several muzzle flashes after what police believe was a fight over a dice game Thursday night. The person in the light-colored shirt appears to fire at least four shots with another firing once.

Cameron Selmon, a 19-year-old who did not attend Tennessee State, died in the shooting and three women were hit by gunfire. All of the women were either treated and released or grazed by a bullet and didn't need medical attention. (Video via WTVF)

During a press conference, police said several people pulled out their cell phones to shoot video of a fight but then scattered when the people involved pulled out guns. Investigators still want to talk with those witnesses.

Along with tweeting the video, police said anyone who recognizes the shooters here and steps forward is eligible for a $6,000 reward.