Teenagers Who Vape Are More Likely To Smoke Cigarettes Later On 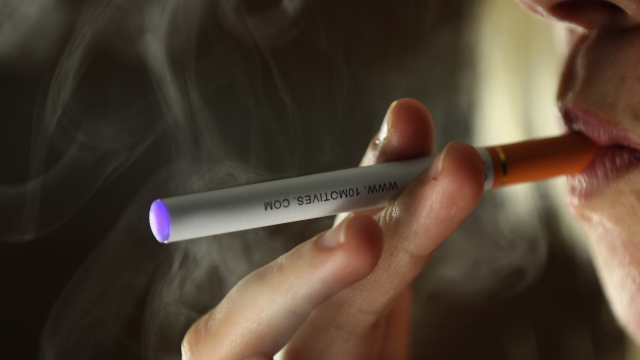 SMS
Teenagers Who Vape Are More Likely To Smoke Cigarettes Later On
By Katherine Biek
By Katherine Biek
July 11, 2016
Compared to nonusers, teens who smoke e-cigarettes are six times more likely to smoke traditional cigarettes later in life, according to a new study.
SHOW TRANSCRIPT

About 17 percent. That's the percentage of U.S. adults who reported smoking cigarettes in 2014 — nearly a 20 percent decrease from 10 years ago.

But that percentage may not stay that low for long. A new study suggests adolescents who smoke e-cigarettes are more likely than nonusers to pick up smoking traditional cigarettes after they turn 18.

Released by the American Academy of Pediatrics, the study looked at the smoking habits of almost 5,500 high school juniors and seniors in California over a 20-year period.

Researchers asked the students about their cigarette use while in school, and then again in a follow-up survey about 16 months later, when it became legal for those students to buy cigarettes.

In 2004 — before e-cigarettes were introduced in the U.S. — 9 percent of the surveyed students reported smoking in the last 30 days. That increased to about 14 percent in 2014.

Compared to nonusers, students who reported smoking e-cigarettes while in school were more than six times more likely to smoke regular cigarettes as adults, according to researchers.

In 2014, the Centers for Disease Control and Prevention reported the number of middle and high school students smoking e-cigarettes had tripled from the previous year to 2 million students.

The safety of e-cigarettes is a highly debated topic. Sure, they don't contain tobacco — the smoking of which can contribute to lung cancer, heart disease and diabetes — but the nicotine in e-cigarettes can disrupt neurotransmitters in the brain.

And even though a majority of adolescent e-cigarette users report only smoking flavored liquids, which aren't supposed to contain nicotine, the National Institute on Drug Abuse reports these products sometimes do contain the chemical.

In an accompanying paper to the study, a professor of pediatrics suggested ways to curb e-cigarette use among adolescents, including schools establishing smoke-free zones in and around their buildings, and providing more education in health class about the dangers of vaping.