Teen Reunited With Mom After More Than A Decade Apart 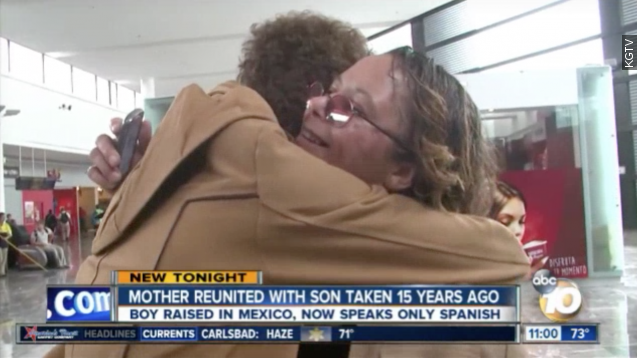 SMS
Teen Reunited With Mom After More Than A Decade Apart
By Cliff Judy
By Cliff Judy
July 4, 2015
Hope Holland says she was never able to find her son Jonathan after the boy's father took him to Mexico as a toddler.
SHOW TRANSCRIPT

This is what more than a decade of separation looks like when it comes to an end. Hope Holland met her son Jonathan at the U.S.-Mexico border Wednesday more than 15 years since his father abducted him and fled the country. (Video via KGTV)

"It's a miracle!" Holland told our partners at KGTV. "I never thought this day would ever, ever come, so I'm very very happy. Extremely happy."

In 1999, Holland says Jonathan's father, who had shared custody, took him to Mexico. Holland says she suffered from depression after losing her son and believed she'd never be able to find him. But social media brought her hope.

Jonathan's photos page on Facebook is much like any other teen's, filled with selfies and several old family photos.

By our count, he posted this photo of he and his older brother at least four times beginning in August 2013. Holland spotted one of the photos soon after.

"That looks like my sons, Jacob and Jonathan!" Holland remembers thinking. (Video via KNTV)

Jonathan is now 18, he only speaks Spanish and has a year left of high school in Mexico. He says he always wondered about the mother he couldn't remember and whether she was thinking about him.

He told KGO-TV in San Francisco he ultimately hopes to split his time between Mexico and his mother in the United States.